The results of this year’s Secondary School Certificate (SSC) and equivalent examinations have broken all records with 91.34 percent success rate, which is 2.31 percentage points higher than that of last year. 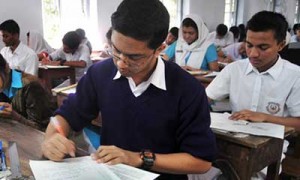 Students of the SSC (vocational) also did well this year with 81.97 percent pass while 89.25 percent passed in Madrasa Education Board.

The number of schools with hundred percent pass stood at 6,210.

Education Minister Nurul Islam Nahid formally handed over a copy of the result to Prime Minister Sheikh Hasina at Gono Bhaban in presence of chairmen of all the boards.

The minister announced the results through a press briefing at the secretariat in the afternoon.

The examinations began on February 9 and the written tests ended on March 20.