Leaders of tour operators and travel agents on Friday demanded budgetary measures for duty-free import of tourist vehicles and 10 per cent cash incentive for tourism business.

‘In the upcoming national budget, we need provision of importing duty-free tourist vehicle and 10 per cent cash incentive as we are earning foreign currency without any support from the government,’ they said.

The demands were made at a pre-budget discussion on civil aviation and tourism at Dhaka Reporter Unity. 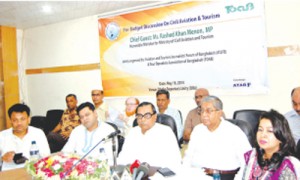 Rashed Khan Menon urged the private sector to come up with investment in a bigger way to develop exclusive tourism zones jointly with the government.

‘At this moment, the government won’t be able to provide the required amount of money for development of those zones. We need private investment in a bigger way under the public-private partnership,’ he said.

Noting that the government is considering tourism as a thrust sector this time, the minister said ‘I assure you that there is political commitment for the development of the tourism sector this time.’

time as the finance minister works with limited resources.

‘But we’ll continue working with you for the development of the highly potential sector,’ he said adding that the finance minister would make specific directives in his budget speech this time.

Economist Golam Moazzem said the government should focus more on the tourism sector as it has vast potential to contribute to the economy.

‘Since the government is giving priority, the tourism sector needs separate identity. Probably, I say with courage, a separate ministry is needed for tourism sector as it has vast potential,’ he added.