A virus called ‘regionalism’ periodically strikes parts of India. It afflicts locals with an urge to wreak vengeance towards “outsiders”, who have flocked there for livelihood, education, job or business. Shiv Sena, and later MNS, had mastered the science of calibrated release of the virus in Maharashtra, especially in Mumbai.

Politicians, lacking in vision about the advantages in strengthening the country’s integrity, look to create a niche for themselves in the political arena by strategically spreading viruses of regionalism, ethnic distrust, linguistic division and communal fundamentalism. They know that the inevitable violent reactions would deflect people’s attention from pressing development issues, reports TNN. 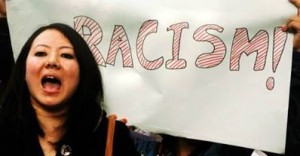 These viruses multiply faster in an atmosphere of distrust, which is fraught with locals’ susceptibility to rumours, and deliver deadly results. We witnessed this in the recent killing of a student from Arunachal Pradesh in Delhi’s Lajpat Nagar locality.

Why do students from remote and not-so-remote parts of India flock to Delhi? Obviously, it is in quest of higher education and better job opportunities, which after more than six decades of India becoming a republic is very unevenly spread in the country.

These ‘outsider’ students are fleeced by all – from auto-rickshaw drivers, landlords who rent out shared accommodation, to the local kirana shop-owner. They know the thumb rule – ‘outsiders’ have no right to protest.

Protests invite ethnically derisive cat-calls. Persistent protest could lead to physical violence. Despite benefiting monetarily from the ‘outsiders’, the locals harbour an inexplicable distrust, which turns into animosity when local goons and petty politicians fan the apprehension that lifestyle of ‘outsiders’ could corrupt local children.

The symptoms behind the Arunachal Pradesh student’s killing had its reflection in Delhi law minister Somnath Bharti’s midnight raid under the glare of TV cameras in Khirki Extension, another south Delhi locality, against foreigners branded as drug peddlers and prostitutes who threatened the locality’s cultural and moral purity.

If the law minister could do a daredevil rescuer-of-society act to cleanse Khirki Extension it of the evil effect of ‘outsiders’ and get away with it, then the local goons of Lajpat Nagar could surely take a leaf out of it to repeat it in an even more violent way.

Those who spread intolerance through viruses of regionalism, ethnic intolerance and linguistic differentiation miss a possible fallout. Their children/relatives could be studying, working or doing business in the land of these ‘outsiders’. If these ‘outsiders’ too get afflicted by these viruses to indulge in violent retribution, will national integrity survive?

That is why the Supreme Court in Raghunatharao Ganpatrao vs Union of India [1994 (1) Suppl. SCC 191] had said, “In a country like ours with so many disruptive forces of regionalism, communalism and linguism, it is necessary to emphasize and re-emphasize that the unity and integrity of India can be preserved only by a spirit of brotherhood. India has a common citizenship and every citizen should feel that he is Indian first irrespective of other basis.”

In the same year, the SC had again warned in S R Bommai case [1994 (3 ) SCC 1], “Regionalism, linguism and religious fundamentalism have become divisive forces to weaken the unity and integrity of the country. Linguistic chauvinism adding its fuel to keep the people poles apart. Communalism and casteism for narrow political gains are creating foul atmosphere. The secessionist forces are working from within and outside the country threatening national integration.”

When the apex court in 1994 was dealing with the deadly effect of these viruses, Arunachal Pradesh Students Union (AAPSU) was threatening Chakma refugees, who had come to India in the 1960s, to quit the state. Neighbouring states had warned the Chakmas against entering their territory, sandwiching the refugees between the frying pan and the fire.

The Arunachal Pradesh government, not surprisingly, had taken a jingoistic stand before the SC. It had said, “Settlement of Chakmas in large numbers in the state would disturb its ethnic balance and destroy its culture and identity. The tribals, therefore, consider Chakmas as a potential threat to their tradition and culture and are therefore, keen that the latter do not entrench themselves in the state.”

But the court put Article 21 over and above everything else and said in NHRC vs Arunchal Pradesh [1996 (1) SCC 742], “No state government worth the name can tolerate such threats by one group of persons to another group of persons; it is duty bound to protect the threatened group from such assaults and if it fails to do so, it will fail to perform its constitutional as well as statutory obligations.

“Those giving such threats would be liable to be dealt with in accordance with law. The state government must act impartially and carry out its legal obligations to safeguard the life, health and well-being of Chakmas residing in the state without being inhibited by local politics.”

The governments would do well to learn from these SC rulings and provide a sense of security to ‘outsiders’, be they in any part of the country, to ward off threats to national integrity and uphold the fundamental right, guaranteed under Article 19 of the Constitution, to move freely throughout the territory of India and reside and settle in any place.