The remittance inflow into the country has registered a negative growth in the just concluded 2013-14 fiscal after 13 years of its positive trend, according to data released by the central bank on Thursday.

Bangladesh received nearly $14.23 billion in remittance in 2013-14, down slightly by 1.61 percent compared to over $14.46 billion a year ago, according to provisional data from the Bangladesh Bank (BB). 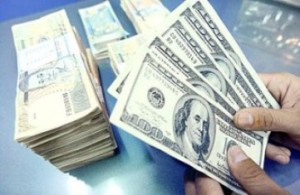 Last time, inward remittances declined in 2000-01.Remittances from millions of citizens abroad are critical for the South Asian nation and are a key source of foreign exchange, alongside garment exports, which account for 80 percent of total export earnings of around $28 billion a year.

Officials say remittances have dropped over the last few months because of political turmoil in the months leading up to an election in January.

Fewer Bangladeshis are also going abroad to work as jobs have dried up in traditional markets such as in Middle Eastern countries.

Remittances along with strong export helped build foreign exchange reserves to a new record of $21.56 billion at the end of June.

Total inflows were worth $14.46 billion in the previous fiscal year.

A majority of Bangladesh expatriates are employed in Middle Eastern countries and almost 60 percent of the remittances come from there.