Habitat for Humanity Bangladesh and Caritas Bangladesh jointly organized an inception meeting of the project “Empowering Vulnerable for four slums by building every day and disaster risk” at MAWTS Auditorium, Pallabi, Mirpur in the city on Thursday. The objective of the Inception Meeting was to share the project information with stakeholders and collect valuable suggestions and recommendations for better implementation. . The project will be implemented in four slums under Dhaka North City Corporation and Khulna City Corporation 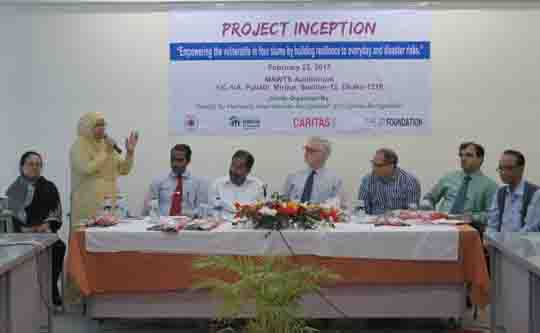 with the aim to empower the vulnerable people to reduce their existing risks, and vulnerabilities through capacity building, construction of resilient infrastructure, creating income generating opportunities as well as proper advocacy. The project is funded by JTI Foundation through Caritas Switzerland. The project will increase the resilience of dwellers in four slums in Dhaka and Khulna city to face disasters, climate change and socio-economic vulnerabilities.

Abu Syed Mohammad Hashim, Additional Secretary, Department for Disaster Management was present as the chief guest. He said “We have to improve education facilities and health facilities for the people living in slums. For the formation a sustainable Bangladesh we have to ensure land ownership of these people because they also have rights to live on their own land.”

As a Special Guest, Dr. Tariq Bin Yousuf, Superintending Engineer, Environment, Climate Change and Disaster Management Cycle, Dhaka North City Corporation and project Director, Urban Resilient Project, World Bank, delivered his speech. He asked everyone to follow slum watching guidelines for the project implementation and utilizing the existing resources for the development of slum. He also mentioned that integration with the city corporation and following the slum model is necessary the development of slums.

Engr. Uttam Kumar Roy, Commercial Manager, Dhaka WASA delivered his speech as special guest. He said “We need to strengthen the people to face the risks in the slums and nursing is important for sustainable development.”

Habitat for Humanity Bangladesh, a branch of HFH International, was established in 1999. It currently operates in 6 locations across the country, aiming to break the cycle of poverty that comes with poorly-constructed homes. To date, around 8,603 low-income Bangladeshi families have partnered with Habitat to improve their housing, water and sanitation, and living conditions with 55,612 people. This represents around 300,000 people who have also received training in microfinance, safe water and sanitation, appropriate construction technology, disaster response and mitigation.