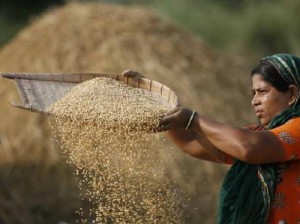 Bangladesh’s rice imports are expected to decline to around 220,000 tons in MY 2013-14, down about 12% from USDA official estimates of 250,000 tons as the new Aman rice crop is expected to be more price competitive than the imported Indian rice.

The local wholesale and retail prices in Dhaka increased last year due to strikes and road blockades since summer 2013. In December 2013, the wholesale prices of rice increased by almost 40% and the retail prices increased by around 24% from the previous year. Last year, many private importers preferred imported rice over the local rice and by the end of December, 2013 the private sector imported nearly 202,000 tons, the USDA Post says.

The Bangladesh government rice stocks as of the last week of December 2013 stood at around 676,000 tons. In the MY 2013-14, the Government of Bangladesh (GOB) purchased 830,000 tons of Boro rice and it plans to buy 300,000 tons of Aman rice by the end of February 2014. According to USDA Post, rice stocks with the private sector (including farmers, millers and traders) are likely to be around 13 million tons.

Bangladesh’s annual consumption of rice is estimated at around 34.6 million tons.