All good things have a way of coming to an end-an unpleasant reality that Bangladeshi RMG players might soon be coming face to face with.

The illustrious rise of the Bangladeshi textile profile is a case study in itself. The boom has contributed greatly to the country’s economic development; having created millions of jobs and helping drive down the country’s poverty rate. 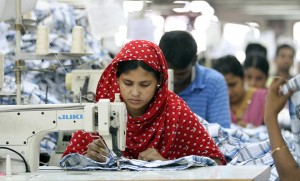 But, in recent years, the rapid change has also created new problems for Bangladesh-a fact made tragically clear earlier this year, when the country faced two of the worst industrial disasters in its history.

As if that ignominy was not        enough, the shutdowns and frequent general strikes in the lead-up to the country’s parliamentary elections have put an additional strain on Bangladeshi garment manufacturers at a time when they were already under pressure to do more to make their factories safer.

Recently still, the execution of Abdul Qader Mollah has practically paralyzed the country’s industry, leaving many to question the future of Bangladesh as a lucrative and sustainable textile sourcing destination.

This situation needs to be analysed in a two-fold manner. For one, one needs to look at the short-term effects and on that front there can be no doubt that the mounting unrest will have a detrimental effect on the countrys readymade garment profile.

Earlier in May this year, the rating agency Moodys warned as much, saying that the continued political strife and worker strikes would likely keep buyers at bay and signs of stress—however short-lived-are already becoming visible.

During the first four months of FY14, Bangladeshi exports of specialised textiles, woven garments and home textiles from the country have all seen negative growth over projected targets, with local news sources frequently reporting that purchase delegations have been cutting back on their visits to the country and instead focussing on other sourcing destinations. Only last month, reports of an attack in Dhaka on a seven-member team of visitors from Spain have added to buyers queasiness

Major beneficiaries of these developments have been India and Vietnam. Pakistani exporters in the meantime are also reporting of increased inquiries. However, a discernable shift is not visible since Pakistan’s export base currently isn       diversified enough to be in any true capacity to gain benefit from reversal of orders from Bangladesh.

However, the unraveling of the Bangladesh garment profile also needs to be seen in light of the recent development on the international textile arena-especially the entry of Pakistan into the GSP+ regime.

A glance back at history shows us that the origins of the Bengali textile boom can easily be traced back to the 70s when the Multi Fiber Agreement was eked out by US President Nixon in a bid to impose a quota on textile imports from the developing countries. At a time when the rest of the developing world was looking for lucrative investment destinations, this helped re-route investment to Bangladesh (which was otherwise exempt from the agreement since it was a LDC).

It stands to reason, therefore, that Pakistan too will benefit from an inflow of FDI into the textile sector in the coming years. Signs of this are already becoming visible with ever increasing inquiries by Chinese and Turkish textile players who are looking to find synergies with local mills in a bid to exploit Pakistan’s hard won GSP+ status.

But, whether or not this happens at the expense of Bangladesh still remains to be seen. For starters, we still need to put our house in order to be able to attract FDI towards this sector.