Robi Axiata Ltd, one of the leading mobile phone operators in the country, has made the first digital flag of Bangladesh.

For 16th December World Record of Human National Flag campaign, Robi wanted that those who will not be able to join the event physically, can join the event virtually by making the first ever digital human flag. With this thought Robi created a microsite – www.bdworldrecord.com on the 11th December 2013. There people got the chance to create the first ever digital human flag of Bangladesh. 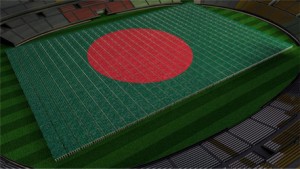 On receiving good response from the online viewers, Robi started the digital flag campaign on the 13th December.  After clicking on www.bdworldrecord.com, people had to click on a tab titled “digital flag”. After clicking on that tab, they was a button titled: click here to build the largest human flag. Participants had to click (as many as a person wants) on that button to create the flag. 16,371 people participated in two days and it took 21,03,630 clicks to complete the flag. Bangladesh got its first ever digital human flag within two days. The participants expressed their feelings posting nice messages regarding 16th December. Viewers, all around the world, were requested to share their opinion on the theme “Why they want to be a part of this record breaking attempt”. In response, 660 people shared their feelings through this micro site.

Anyone can visit the microsite now and witness best wishes and the human flag.

One of wishes is “Thanks to Robi and all of the people who are making such a wonderful history for us… We are proud of our freedom fighters and we all respect our martyrs…. Love you. @Bangladesh.”