Robi has stood by the flood victims in the wake of the recent flash flood in the South-eastern region of the country. It was the first corporate house to respond to this natural calamity. 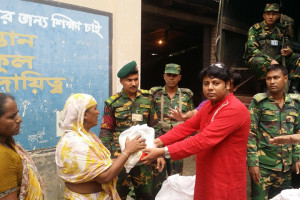 Robi is also reaching out to the large number of flood-affected people across Cox’s Bazaar and Ramu, with support from Bangladesh Army’s 10th Division.

As a responsible corporate entity, Robi has always taken part in the humanitarian relief effort in the wake of natural calamities affecting the country and is committed to stand by the society during moments of trial.