To offer affordable internet for their users, Robi has for the first time in the country introduced a unique internet sharing platform named “ShareMyNet”. That will allow users to enjoy internet in a group and reduce internet spending by upto 50%+. 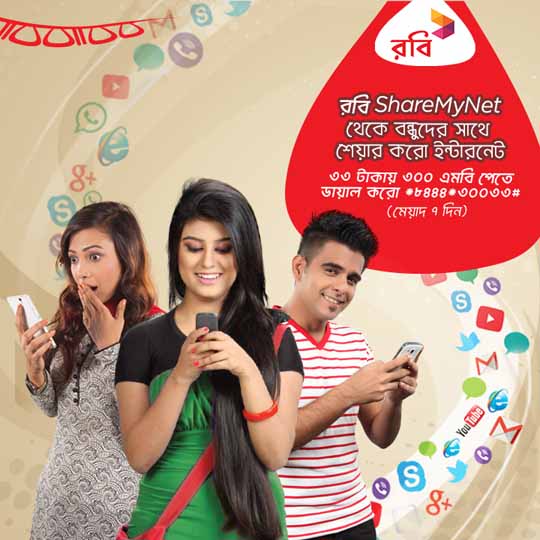 devices they use and with their friends & family at the same time as long as they are Robi subscribers and are using internet enabled devices. Robi subscribers first have to create a group by dialing *8444# to decide on who they want to share their internet with and then purchase ShareMyNet internet packs to enjoy this amazing feature.

There is no additional charge to create groups and to enjoy the sharing feature. It also allows one the flexibility to accept or deny shared quota from others. Also the principal user has the choice to change the allocated internet volume with others at any time during the validity period.

Robi Axiata Limited is a joint venture between Axiata Group Berhad, of Malaysia and NTT DoCoMo Inc., of Japan. Robi is the second largest mobile phone operator in Bangladesh in terms of revenue, with 27.4 million subscribers, as of June 2015. Robi network provides nationwide coverage to nearly 99% of the population with 12,679 2.5G BTS and over 2,450 3.5G sites. Robi proudly claims to have the widest international roaming service in the market, connecting 600 operators across more than 200 countries. It is also the first operator to introduce GPRS and 3.5G services in Bangladesh. The Company has introduced many first of its kind digital services in the country and has invested heavily in taking mobile financial services to the underserved communities in the rural and semi-urban areas.