Robi’s vehicle tracking solution, Robi Tracker has recently helped one of its customer to find his stolen motorbike. Mr. Sayem Mahmud Chowdhury, the owner of the bike, thanked Robi Tracker for the support. 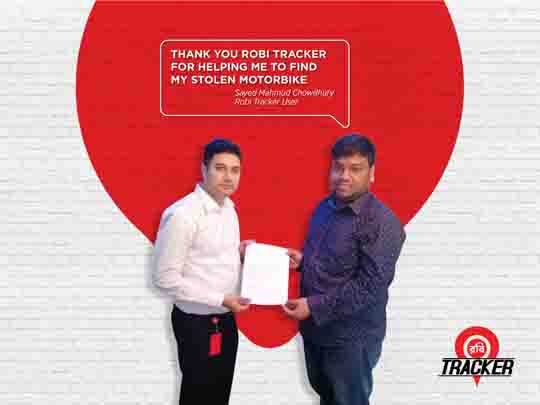 that his bike is not in the parking place- North Kafrul Dhaka. Then he called the Robi Tracker helpline to find out the location of his stolen bike.

Robi Tracker helpline agent updated him with the exact location after verifying Mr. Sayem as the actual owner of that bike. Helpline team gave him pinpoint location of the stolen bike & kept him updated about it till he reached the location physically. Based on the location provided by the helpline agent, the customer was able to find his stolen bike from Ibrahimpur, Dhaka at 5.02 am.

Robi Tracker uses GPS technology to get a detailed reading of the vehicle location, which is then plotted and pinpointed on Google Maps. Using the SIM based GPRS technology, this information is seamlessly broadcast to the client’s personal computer or mobile screens. The vehicle can then be tracked through the Robi Tracker Web Portal, Mobile App or SMS 24/7.

Robi Axiata Limited (“Robi”) is a subsidiary company of the Asian telecom giant, Axiata Group Berhad based in Malaysia. Robi is the second largest mobile network operator in Bangladesh. Robi has introduced many first of its kind digital services in the country and has invested heavily to take its mobile network to the underserved communities even in the rural areas. Other shareholders in the entity are Bharti Airtel International (Singapore) Pte Ltd and NTT DOCOMO Inc.

Health sector needs to be empowered in next budget.