The students of Rajshahi University (RU) staged sit in at the university administration building premises protesting the police firing on them and demanded exemplary punishment to the involved police members. 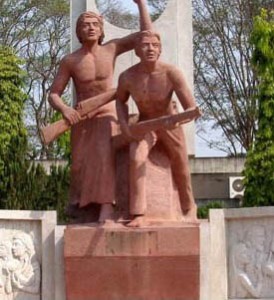 Sabrina Jahan, a second year student of Sociology department of the university was crashed under the wheels of a battery-run three-wheeler, locally called easy bike, in front of the university’s main entrance on Thursday, sparking an angry protest by students.

On Saturday, over 200 students brought out a protest rally from Momtaz uddin arts building around 11:00am and gathered in front of the administration building where they sat in for an hour.

They demanded typical punishment of the concerned law enforcers along with another demand of deploying traffic police at Binodpur, Kazla and main gate area.

The agitate students called off their sit in programme as the vice chancellor of the university assured of them to meet up the demands.

Prof Dr Muhammad Mizanuddin, vice chancellor of the university told that they would take necessary steps to bring the concerned law enforcers under punishment.

However, Abdul Mazid, officer-in-charge of Motihar Police Station, said police fired rubber bullets on the students as they tried to vandalise vehicles on the road.