Bangladesh’s Shakib Al Hasan has regained the number one spot in the ICC player ranking for one-day international after his outstanding performance against India. 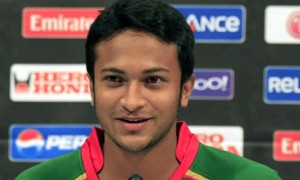 With this, he has once again become the top all-round cricketer of the world in all three formats – ODI, T20 and Test.

The prolific 28-year Shakib scored 123 runs (52, 51 not out and 20) and claimed three wickets for 99 runs in the recently-held three ODI series against India.

He replaced Sri Lanka’s Tilkaratne Dilshan from the number position in the ODI, according to the latest ICC ranking.

Shakib was already holding the number one spot in both T20 and Test ranking.

He promoted himself to 408 points from 398 in the previous ranking, in which Dilshan had 404 points.