The Singaporean authorities are planning to deport 52 Indians and a Bangladeshi worker for getting involved in a rare riot that hit the city-state, recently. 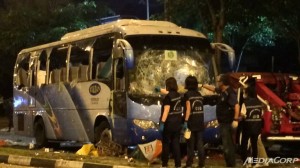 The planned deportation can be seen as a tough move by the Singaporean authorities ensure that no such calamity takes place in the future.

The riot was caused following an Indian national died after a moving bus hit him.

Nearly 400 people were engaged in the riot causing havoc in a certain part of the city in protest of the accident.

Singaporean police has said that they have completed their probe for the incident.