The Bangladesh Ambassador in Kingdom of Saudi Arabia (KSA) Mohamed Shahidul Islam has urged his compatriots living in the Kingdom to work hard to enhance the image of Bangladesh in the Kingdom and to contribute to the economic development of their motherland.

The envoy, who made the appeal during the 43rd anniversary celebrations of his country’s Victory Day at the embassy premises in Riyadh, also urged the Bangladeshi expats to send their remittances through banking channels and take part in the economic development of the country by investing there, reports Arab News. 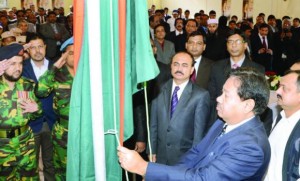 He also underlined the need for renewing the commitment and making concerted efforts for the socio-economic development of Bangladesh.

The day’s program included recitation from the Holy Qur’an followed by the ceremonial hoisting of the National Flag by Ambassador Islam.

Subsequently, messages from the country’s president, prime minister and foreign minister were read out. The morning event was attended by more than 500 community members including embassy officials, students and teachers of BangladeshInternationalSchools and representatives from various Bangla organizations in the Kingdom.

Highlighting the significance and spirit of the day, Islam paid rich tributes to the martyrs who made supreme sacrifices to liberate the country, besides saluting the Father of the Nation Bangabandhu Sheikh Mujibur Rahman. He highlighted his legendary leadership in the historic war of liberation.

He also praised the statesmanship of Bangabandhu and his dedication to the development and well being of the country and its people.

“With a view to realizing the dreams of the Father of the Nation, we must unitedly contribute to the development of our country,” he said, and traced the significant development made by the country in the last 42 years.

The liberation war began on March 26, 1971, and culminated in the victory of freedom fighters on Dec. 16 the same year. “Thus, Bangladesh came into being as a sovereign and independent state,” he said.

He also expressed his deep appreciation for the expatriate community for their invaluable contribution to their motherland as well as the host country. There are about 1.2 million Bangladeshis spread throughout the Kingdom, he said.

A special prayer was held seeking salvation for the departed souls of the valiant freedom fighters for their sacrifices during the war of independence and for continued peace, progress and prosperity of Bangladesh.

Islam and his wife Shahnaz Islam will also host a cultural event at his official residence, the Bangladesh House, on Friday.

In Jeddah, Bangladesh Consul General Mohammed Nazmul Islam hoisted the country’s national flag in the morning and hosted a cultural program at the consulate premises in the evening.

The English and Bengali sections of BangladeshInternationalSchool in Jeddah held two separate functions to commemorate the event.