A team of 5 students from BRAC University participated in the largest student based competition – Hult Prize 2015 under the guideance of Syed Mahmudur Rahman, a respected faculty member of BRAC Business School (BBS). 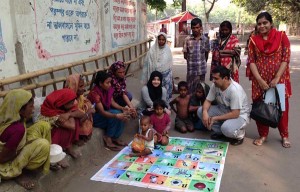 In collaboration with Clinton Global Initiative (CGI), Hult Business School organizes a global competition for undergraduate and graduate students all over the world to come up with innovative ideas for starts-ups that will solve a social issue faced by billions in need. Each year the agenda is set by former US President Bill Clinton. CGIgrants USD1 million as seed capital to help the winning team launch a social enterprise.This year, the agenda that has been set is “Providing Early Childhood Education (ECE) to the kids between ages 0 to 6 years old in urban slums”. President Clinton mentioned the Hult Prize in a TIME Magazine article about “the top 5 ideas that are changing the world for the better.” Also, our respected Dr. Muhammad Yunus is a part of the judges’ panel at Hult Prize Competition.

The brand name of the prototype designed by the participating students of BRAC University is “Sneho”. BRAC University had been given the opportunity to run Hult Prize @ BRAC University and to select a team which would directly secure a place in the regional rounds. Initially, in November 2014 the group competed against 18 other teams from BRAC University and qualified in the elimination round. Following that, they became the winner in the quarter final round at Hult Prize @BRAC University. Through that, they had the opportunity to pitch their big idea in the regional round. During recent times (from 11th March 2015 to 17th March 2015), the team travelled to Shanghai, China and actively participated in the regional round.The idea put forward by the team was appreciated by every member of Hult Business School as well as the judges. It is also mentionable that the winner of Hult Prize 2014 and the CEO of Nano Health Mr. Manish has also praised Sneho’s prototype. With much support and enthusiasm from Hult Business School and others, the team has been endorsed to prepare for the next round, which is online crowd funding campaign. A win here will take them directly to the final round which is due to be held in September 2015 in New York.

The core product of Sneho is a durable alphabet mat for the underprivileged kids in the urban slums.Researches show that the underprivileged children dropout from school at a very early age because they cannot adapt to mainstream teaching. And thus, to familiarizethem with the teaching aids, Sneho will be providing alphabet mats designed for different age groups, along with used toys and books from the privileged class of the society for redistribution to the kids in the urban slums.

It is notable that one mat costs around US$3, which is approximately BDT 250. Just imagine, the cost of a mat is less than a cup of coffee for many! Sneho aims to involve different parts of the society to work for this noble cause, because only a social involvement can solve a social problem. Therefore, Sneho endeavors to establish the basis of Early Childhood Education for the kids in the urban slums in a simple and holistic approach which has the potential to change lives. The model is easily scalable and replicable based on cultural requirements, therefore change millions of life all over the world.

It is a privilege for us to say that only a few selective teamshave been endorsed for the online campaign and we have made your way to it. The online campaign became live from 22nd March and will run till 7th May 2015. Currently, Sneho is running their first campaign at BRAC University starting from 31st March 2015 till 2nd March 2015.

It is our humble request to all to support us and spread the word. That will open new windows of opportunity and help to change lives. Even a smallest contribution can make a huge difference.