Novak Djokovic set up a final showdown with Rafael Nadal as the defending champion cruised to a 6-3 6-3 victory over Stanislas Wawrinka in the semi-finals of the ATP World Tour Finals here.
Djokovic extended his winning streak since the US Open to 21 matches and will bid for his third Tour Finals crown when he faces world number one Nadal in the final at London’s O2 Arena.
After losing out to Nadal in the race to finish the year top of the world rankings, world number two Djokovic has a golden opportunity to get a measure of revenge against the Spaniard.
The Serb has now won his last nine matches at the O2 Arena and will seek to avenge his recent US Open final defeat against Nadal, who holds a 22-16 edge in their 38 meetings.
“It was a very enjoyable match for me, it was my best performance at the tournament so far,” said Djokovic on Sunday.
“I don’t think it’s the right word to say I’m unbeatable. Nobody’s unbeatable.
“Being in the moment and taking it one step at a time helps me keep my focus.”
Wawrinka had enjoyed his best season over the last 11 months and, after advancing to the last four on his maiden appearance at the Tour Finals, the Swiss seventh seed was bidding to become the first debutant to reach the final since David Ferrer in 2007.
But Djokovic had won the last 14 of 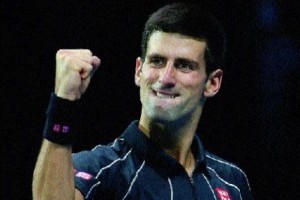 his 16 meetings with Wawrinka dating back to 2006, including nin

e of their 10 clashes on hard courts.
Two of those victories were among the most enthralling matches of 2013, with Djokovic emerging victorious from five-set encounters with Wawrinka in the Australian Open fourth round and US Open semi-finals, but this routine win never threatened to reach those breathtaking standards.
Wawrinka showed no signs of nerves in the early stages and earned the first two break points of the match in Djokovic’s second service game.
The Serb go

strokes, he broke again to move 5-3 ahead and took the set after staving off one more break point.
There was little Wawrinka could do to stem the tide and he was swept away as Djokovic broke in the opening game of the second set.
Wawrinka was going for his shots in a bid to make a late comeback, but Djokovic showed all his class and quality to break again and close out the win in one hour and 24 minutes.

t out of trouble once, but Wawrinka pounced at the second attempt, racing to the net to punch home a volley and take a 2-1 lead.
Djokovic produced a typically defiant response as he pressured Wawrinka into conceding a break point in the next game and took it when the Swiss missed his forehand.
Now the momentum was with Djokovic and, forcing Wawrinka into some rash ground