Stuart Broad’s body may not have enjoyed it much but the England paceman was nonetheless delighted to have had a full day in the field in the tourists’ final warm-up for the Ashes on Wednesday.

The 27-year-old was the pick of the English bowlers on the opening day of the four-day match with three wickets in a bright early spell but his team mates took some punishment later on from an Invitational XI.

After much of their previous warm-up match in Hobart was lost to rain and wet weather forced them to train indoors in Sydney, the best news for the English was the sunshine bathing the Sydney Cricket Ground.

“It was good to get a first 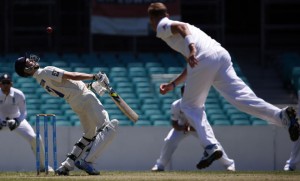 full day in the field since September, I think I will personally benefit from that,” said Broad, who finished with figures of 3-36 from 20 overs.

“I feel horrendous, my legs are barking at me, but you know as bowlers you are going to get better. Whatever work you do in the nets or whatever, it’s nothing like game.”

Having said that, Broad was not worried that England, gunning for a fourth straight Ashes triumph, might arrive at the Gabba on Thursday week undercooked.

“We’ve got guys who’ve played 50,60,70 tests, guys who’ve got fantastic winning records and you can fall back on that experience when you don’t get that time in the middle,” he added. “There’s no concern about that in the dressing room.”

Having been restricted to a few dozen overs in the field in Hobart, England elected to bowl first when they won the toss and made the most of lively early conditions to reduce the locals to 93 for five.

An unbeaten sixth wicket partnership of 178 runs between Ryan Carters (94) and Peter Nevill (76) frustrated the tourists, though, and took the hosts to 271 for five at the close of play.