Although the center was established in 2013, because of logistical complexities, it officially opened Monday. Chancellor Nicholas Dirks presided over a ribbon-cutting ceremony. After the event, Sir Fazle Hasan Abed, founder of BRAC University — one of the universities 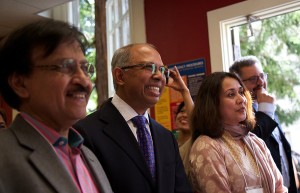 with which the center will partner — gave a guest lecture to celebrate the center’s launch.

The Chowdhury center is the first of its kind in the United States, and it is housed within the campus’s Institute for South Asia Studies. The center supports research, promotes art and culture, awards scholarships and, through a research-exchange program, builds a relationship between Bangladeshi institutions and the University of California, according to its website.

Subir Chowdhury is the center’s primary benefactor and donated $1 million to the center through the Chowdhurys’ namesake foundation. Chowdhury, the CEO of ASI Consulting Group and an author, was born in Bangladesh.

“The majority of the work at the center will be practical work, and that is very critical,” Chowdhury said. “My hope and wish is that the center will have an impact on improving the quality of life on Bangladesh people.”

Chowdhury said that he recognized the importance of a center for Bangladesh studies in the United States and considered a few other universities, but that he chose UC Berkeley for the passion he saw in both the students and in Dirks.

“(Bangladesh is) a nation that still struggles with all kinds of issues and challenges,” Dirks said. “But (it) is also a sign of great hope and optimism … that we will be able to explore together as we engage with our colleagues and scholars — both here, elsewhere in the United States, across the world and in Bangladesh.”

The seed funding that the Chowdhurys provided will support, among other things, public lectures, conferences and symposiums to encourage collaboration among researchers, Dirks said. The center will also offer undergraduate scholarships and graduate fellowships.

According to Sanchita Saxena, executive director of the Institute of South Asia Studies and the director of the Chowdhury center, the new center has already supported the study of topics such as antibiotic resistance, technology to improve the safety of garment-sector workers and the role of women in enterprise development.

Caitlin Cook, a master’s student at UC Berkeley’s School of Public Health and one of the center’s inaugural fellows, researched antibiotic resistance with the help of researchers at the International Centre for Diarrhoeal Disease Research in Dhaka, Bangladesh.

“It’s so important to be able to exchange information and knowledge between the two nations,” Cook said. “Public health often knows no borders — for example, bacteria and pathogens aren’t limited to one region of the world. … That exchange of knowledge is so critical.”