THE men from a village of beautiful Bangladesh were shouting, beating the ground with long sticks.

Crouching down, growling and marauding, is not a royal bengal tiger but one of their own.

It’s just past dusk and the band of villagers – a bit like volunteer rural firefighters – are demonstrating how they balance protecting the endangered bengal tiger, the national animal of Bangladesh, with safeguarding the village community.

We’re in the Sundarban of Bangladesh – a vast natural wonderland seen by few Westerners. The UNESCO World Heritage Site is the largest mangrove forest-wetland in the world and is populated by hundreds of bird and fish species, reptiles, deer and dolphins – and a depleting number of bengal tigers. 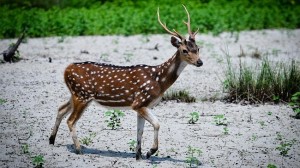 Back in 200AD a city stood here. It was built by a rich and powerful merchant by the name of Chand Sadagar. Today its ruins rest in the once-dense Baghmara Forest Block.

Yet this stunningly beautiful part of the world (Sundarban is named for its Sundari trees and means “beautiful forest”) has a bad reputation in the West, where we more often than not only hear of the 10,500sq km area’s natural disasters and its flooding rains.

About two-thirds of the Sundarban falls inside Bangladesh, while the remaining third is within West Bengal, India. Climate change exponents regard Bangladesh, and its 166 million people, as among the world’s countries most vulnerable to extreme changes in weather patterns. But there’s another story.

Back in the village the men are still beating the ground and yelling. Finally, the corralled “tiger” gives up its quest to enter the village and turns away to head back across the river from where it came.

There are believed to be a mere 300 or so tigers remaining in the Sundarban. Changing weather and the depletion of fish and forest areas are blamed for the increase in attacks on villagers by hungry tigers.

Yet the preciousness of the tigers has not been lost on these villagers, some of whom have lost relatives to tigers and have themselves been attacked. Hence the Wild Team tiger defence and mapping project, one of the many programs of MRID, the multipurpose rural and industrial development organisation.

We’d arrived at the village aboard the ML Bawali, a simply fitted five-cabin ship that was our base during two days in the Sundarban.

We boarded the Bawali at Mongla, the main seaport in the Bagerhat district of southwestern Bangladesh. We lunched on Bangladeshi curries and rice dishes while heading down the waterway to visit another MRID success story, a project for village women who once fished for their livelihood but who have been retrained in handicrafts to make beautifully embroidered quilts, bags and cushion covers that end up in the market.

The lives of these women and their families have changed markedly for the better as a result. Beautifully attired in colourful saris, the women and their children gathered to meet us to tell their stories and, eventually, to sell us their wares.

Friendly, happy faces keen to share their journey and how they envisage a better future.

After visiting the village’s small Hindu temple we said our goodbyes and headed back along the path towards the Bawali, past mud homes with fish ponds, past giant tightly packed haystacks and rows of drying dung sticks that turn fresh cowpats into household cooking fuel, thus reducing reliance on forest fuel.

Later that day the Bawali took us to Harbara, a forest station beside a freshwater pond, which is approached via a boardwalk through the mangroves.

The rare opportunity to view nature up close meant an early morning start the next day – a small wooden boat trip meandering along the canals and creeks in the hope of spotting birds, monitor lizards, spotted deer, crabs, macaques, and, if we were really lucky, a Bengal tiger.

I wish I could say that we saw all of the above but, alas, the weather was inclement, and our sightings few that morning. Had we been lucky, we might have come across the saltwater crocodile that’s only found in the Sundarban or the Gangetic freshwater dolphin that chooses to live here and only two other places in the world.

But I didn’t mind. I’d got to meet the village “tiger”, journey the waterways and meet the enterprising women forging better lives in a changing world.

China Southern Airlines operates flights from Sydney to Dhaka via its hub in Guangzhou. For details, phone 1300 889 628.

The cool and temperate winter season from October to February is the best time to visit Bangladesh.