The sea level in the Sundarbans is rising at an “alarming” level, endangering the habitation, said a World Bank report.

The report stated that the sea level could witness an estimated 3 to 8 mm rise per year and mainly attributed it to land subsidence caused by various natural and anthropogenic processes, NDTV reports on its online site. 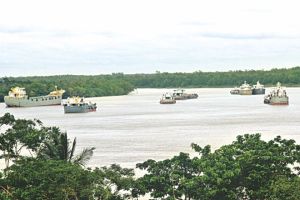 The report, titled “Building Resilience for Sustainable Development of the Sunderbans – Strategy Report” said, “Parts of the coast in the south were rising because of uplift which illustrates that impacts were not homogeneous and differ according to varying geological processes.”

The World Bank report said that seismic events, such as the 2004 tsunami and the aftershocks, could also shift land levels by a meter more over a period of few days, the NDTV reports added.

“But most change is gradual and a frequent response is simple inundation and loss of land. The Ghoramara Island (part of Sagar block in Sunderbans) will be completely submerged in the coming decades and the Island is largely uninhabitable.

Senior consultant with the World Bank Sanjay Gupta told PTI that the situation in the Sunderbans was alarming and called for immediate and concrete steps to tackle it.

Mr Gupta pointed out that the subsidence and inundation also led to routine flooding which contributes to salinization of the soil and fresh water resources.

The report pointed out that flooding from storm surges remained a significant hazard even when embankments were present, as natural disasters were capable of wiping out embankments.

“Given the relatively flat landscape, hazard mapping suggests that a 45 cm rise in the sea level would destroy 75 per cent of the Indian and Bangladeshi Sunderbans,” it stated.

While talking about the impact of sea level rise on mangrove forests, the report stated that the changing estuary dynamics had reduced the transport mechanism for wild mangrove propagules (seeds).

The report stated that management of estuaries could be the key to tackle the impact of sea level rise in the Sunderbans.

Esturaies, which are generally a body of water formed where freshwater from rivers and streams flows into the ocean, mixing with the seawater, has been classified into three kinds in Sunderbans.

One is Oversized estuary for example Banstala and Ghughudanga which denominate channels significantly wider than predicted for present day tidal change.

Another one is equilibrium estuaries such as Kalchara and Matla estuaries, which denominate channels widths approximately in agreement with predicted values.

And the last one is undersized estuaries such as Pathanakhali Nadi and Bhanga Khal, which signifies that channels are significantly narrower than predicted for the present day tidal regime.

“In over-sized estuaries no response is required while in the equilibrium estuaries a managed realignment of embankment will be necessary. In the undersized estuaries it is recommended that before any embankment realignment urgent attention is given to the aquaculture practices that make a major contribution to tidal flow and thus erosion of these channels,” the report suggested.