Now Tarin acted two TVCs – ‘Banglalink -Bondho Thaka Shongjog’ and ‘Meril Petroleum Jelly’ are being aired in different channels.   Under the direction of Ashfaq Bipul and Gazi Shuvro Tarin’s performances in these two TVCs are being appreciated by the viewers.

While talking about Tarin’s performance director Ashfaq Bipul told this correspondent, “I always feel comfortable to perform in experimental work.   With Tarin it was like that work. This TVC has already came into limelight now.”

While sharing her feelings to perform in two mentionable TVCs at present at a time Tarin said, “These two TVCs were made in separate time. But these TVCs are being aired in same time. I am receiving so much response that I couldn’t believe it earlier. 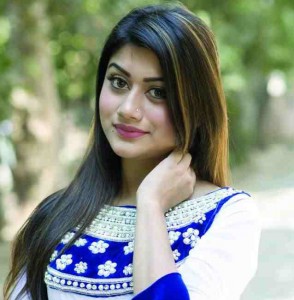 I am really grateful to Bipul bhaiya and Shuvro bhaiya to give me the opportunity to perform in these nice TVCs.”   It may be mentioned that Tarin Rahman acted first TVC was ‘Navana Real Estate,’ made by Maksud Rahman. That TVC yet not broadcasted in any satellite channel.

She is daughter of late Shafiqur Rahman and Shamima Rahman. Tarin is the younger sibling of her parent.