Newly-established The Farmers Bank sanctioned and disbursed around Tk 50 crore in loans to a number of companies violating the banking rules and regulations, found a Bangladesh Bank investigation.

The BB probe found that the bank’s executive committee chairman Md Mahabubul Haque Chisty was directly responsible for the anomalies as he, in some cases, passed loans without taking the approval of the EC committee, bypassed branch 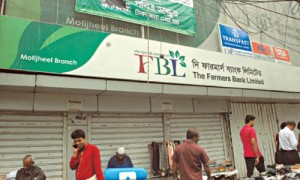 The BB investigation teams conducted separated inspections at the bank’s Gulshan and Motijheel branches in February when they unearthed the irregularities.

The central bank has already served a show-cause notice asking Chisty, also a director, to reply why any action would not be taken against him.

‘We are now scrutinising the reply of the show-cause notice of Chisty. The BB will take punitive measures against him if his answer fails to substantiate his stand,’ said Chowdhury.

Chisty could not be reached for comments as his official mobile number was found switched off in the last two days.

His private secretary Zakir Hossain on Monday said Chisty was out of the Dhaka city for few days.

Farmers Bank chairman Mohiuddin Khan Alamgir on Monday told New Age, ‘The central bank has wanted to know about the issue. We have replied to the central bank.’

‘To my knowledge, no director of my bank took any steps which are illegal,’ said Alamgir, who is also a lawmaker of the ruling Awami League and a former home minister.

The BB investigation found Chisty approved an overdraft loan facility of Tk 5 crore to Prime Islami Securities Ltd, a client of the bank’s Motijheel Branch, without placing the loan proposal of the branch before the executive committee meeting violating banking rules.

In another case, Chisty initially unilaterally approved a loan of Tk 2.50 to Saif Powertec Ltd without taking any recommendation from the Gulshan Branch after Saif Powertec applied with the branch for taking a loan of Tk 3 crore as working capital on July 3, 2014.

Subsequently, Chisty topped up the loan facility to Tk 4 crore to Saif Powertec by giving direction over telephone to the branch.

The EC committee of the bank, however, gave post-facto approval to the loan proposal of the company violating the central bank circular.

The EC committee of the bank, led by Chisty, on the other hand, granted Tk 8 crore loan to United Bricks and Fultola Filling Station on March 5, 2014 without taking any credit proposal from the bank’s Gulshan Branch.

The Gulshan Branch placed negative recommendations about the two companies’ business status before the head office of the bank but the EC committee avoided the suggestions breaching the banking rules and regulations.

The EC committee approved a credit limit of Tk 15 crore on March 5, 2014 to Urban Design and Development Ltd against an under construction flat which was worth Tk 5.91 crore.

The BB report said that the committee had not taken proper mortgage against the loan which made a threat to the depositors’ money.

Besides, the committee approved the loan before receiving the credit proposal from the branch.

The EC committee in its 14th meeting also approved a term-loan of Tk 16 crore and a working capital of Tk 2 crore in favour of Chittagong Fisheries, also a client of the Gulshan Branch, to purchase a fishing trawler.

The EC committee approved the loan before preparing the credit proposal by the bank’s branch.

‘In some cases the EC committee is directly responsible. As the head of the committee, Chisty was served the show-cause notice for all the anomalies,’ explained a BB official.

He said, ‘We are not satisfied with the Chisty’s reply. But, we do not know whether any action could be taken against him as the bank has a huge political link.’

Farmers Bank is one of the nine new banks that the previous Awami League-led government approved in 2012 because of their strong political backing.

BB officials said the central bank also issued two separate letters to managing director of Farmers Bank asking him to take required measures in this regard.

When asked about the irregularities on Sunday Farmers Bank managing director Choudhury Moshtaq Ahmed declined to make any comment asking New Age to communicate with him on the next day. But Moshtaq was not available in his office on Monday.