“We want a peaceful environment in the country to run our businesses smoothly,” Kazi Akramuddin Ahmed, president of Federation of Bangladesh Chambers of Commerce and Industry (FBCCI), said during their protest programme carrying white flags in front of FBCCI building at Motiheel on Saturday.

He urged the political leaders to reach a consensus to end the escalating violence and ensure a business-friendly environment in the country. 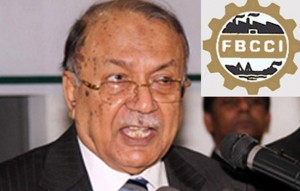 Over 3,000 businesspeople gathered in front of the FBCCI building from 11:30 am to 12 noon, carrying white flags in support of their demand for an end to the ongoing instability and protesting the destruction of business establishments, reports UNB.

The Federation of Bangladesh Chambers of Commerce and Industry (FBCCI), the country’s apex trade body, organised the protest programme as the ongoing political violence is taking its heavy toll on the economy.

Kazi Akramuddin said, “We had met the chiefs of the two parties (Awami League and BNP) and urged them to reach a consensus to end the crisis, but we didn’t get any response to our call from them.”

President of Bangladesh Garment Manufacturers and Exporters Association (BGMEA) M Atiqul Islam said, “We don’t want sick politics. It won’t be possible to recoup the losses we have incurred so far. It’s the government’s responsibility to ensure a safe business environment for us.”

Salman F Rahman said, “If you fail to lead the country properly we will take the lead to do that.”