UN climate talks ran deep into extra time in Warsaw on Saturday as rich and poor nations butted heads over their respective contributions to staving off dangerous planet warming.

Exhausted negotiators and ministers shuttled to and fro in the early morning hours to try and lay some groundwork for an ambitious climate pact which must be signed in Paris by December 2015. 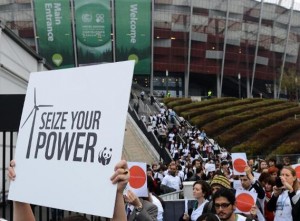 Negotiators are also at odds over a roadmap that must detail steps to arrive at the new deal in two years’ time.

The talks were scheduled to have closed at 1700 GMT on Friday, but there was still no sign of resolution nine hours later, reports AFP.

Gathering delegates from more than 190 nations, the notoriously fractious annual negotiations are working towards a deal that will for the first time bind all the world’s nations to curbing Earth-warming greenhouse gas emissions.

“If we don’t succeed in Paris, the chances of us meeting the goal of limiting global warming to two degrees will be limited, or none,” French Development Minister Pascal Canfin warned on Friday.

A major sticking point was the insistence of some developing nations like China and India, their growth fuelled by fossil fuel combustion, on guarantees of less onerous emissions curbs compared to wealthy nations.

In hotly disputed language, some want the new deal to impose “commitments” on developed countries and seek only “efforts” from emerging economies.

The issue led to Europe and a group of developing economies trading barbs on Friday evening.

European climate commissioner Connie Hedegaard accused a group of “like-minded” countries of opposing a “push” towards the 2015 deal by insisting on the rich-poor country firewall.

“It is not acceptable to the European Union, but I also think to really many others,” she told journalists.

A group calling itself the Like-Minded Developing Countries, which includes China and India as well as Pakistan, Malaysia, the Philippines, Saudi Arabia and Venezuela, took issue with what they called the “brazen attack”.

“The EU chief is responsible for damaging seriously the atmosphere of confidence and trust in this process,” said Venezuelan climate envoy Claudia Salerno, who claimed to speak on the group’s behalf.

As emissions continue to grow year after year, developing nations say their developed counterparts must have more responsibility for curbs given their long history of fossil-fuel combustion.

The West, though, insists emerging economies must do their fair share, considering that China is now the world’s biggest emitter of CO2, with India in fourth place after the United States and Europe.

Another point of disagreement is finance.

Developing nations insist that wealthy nations must show how they intend to keep a promise to ramp up climate aid to $100 billion (74 billion euros) by 2020, up from $10 billion a year from 2010-12.

Still struggling with an economic crisis, however, the developed world is wary of unveiling a detailed long-term funding plan at this stage.

The funding crunch lies at the heart of another issue bedevilling the talks: demands by developing countries for a “loss and damage” mechanism to help them deal with future harm from climate impacts they say are too late to avoid.

Rich nations fear this would amount to signing a blank cheque for never-ending liability.

As for a roadmap to 2015 that the United States, Europe and some others had expected to emerge from Warsaw, US envoy Todd Stern said Friday that countries should ideally submit initial emissions- cutting offers by about the first quarter of 2015.

But a draft negotiating text made only vague references to a timeframe.

On Thursday, environment and developmental observer groups stormed out of the conference, saying the talks had produced little more than hot air since opening on November 11, and were “on track to deliver virtually nothing”.

But there were some positives.

The UN’s Adaptation Fund, which helps poor countries deal with the effects of climate change, had received pledges of $100 million.

And progress was seen in the design of a programme called REDD+, aimed at funding poor country projects for reducing emissions from deforestation and forest degradation, with pledges of $280 million in financing.