Before working in television commercial (TVC) of Horlicks directed by Amitabh Reza popular TV actress and model Shamima Tushti had performed in some TVCs. But like the TVC of Horlicks Tushti acted others didn’t attract the viewers. In this TVC, the dialogue ‘Bhabi,’ which was uttered by Tushti became popular to all. 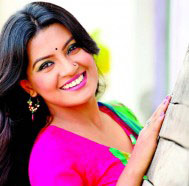 After the TVC of Horlicks Tushti didn’t perform in any other TVC. This time she has performed in two new TVCs at a time. These are: ‘RFL Home Organiser,’ directed by Syed Apon Ahsan and ‘Pran Twitter,’ directed by Mahmud. Shooting of these two TVCs have already been done. These TVCs will go on air in different satellite channels from next week, said Tushti.
While sharing her feelings to perform in two new TVCs at a time Tushti told this correspondent, “In these two TVCs, I was presented in different ways. I have performed very cordially and sincerely while performing in these TVCs. I hope viewers will enjoy these.”
However, on December 14, Shahidul Islam Khokon directed movie ‘Lal Sabuj’ will be aired on Channel i at 1:30pm. It was Tushti performed first released movie. But Tushti acted first movie was Belal Ahmed directed ‘Nondito Norok-e.’ Tushti acted last movie was Golam Rabbani Biplob directed ‘Swapnodanai.’
It may be mentioned that Tushti firstly performed in TVC of ‘Ispahani Mirzapore Tea’ under the direction of Mumbai based director Amitavo.
Tushti, born on September 29, acted drama serials ‘Bishakha,’ ‘Tin Tala Tin Chabi,’ ‘Thikana Jana Nai’ and ‘Jibon Sangsar’ are being aired in different satellite channels now.