The All Party UK  Parliamentary Group (APPG), chaired by Anne Main, has released a report “After Rana Plaza: 2013” on the readymade garment (RMG) industry in Bangladesh.

The report is the result of six months of research into the causes of, and circumstances surrounding, the RanaPlaza collapse, conducted by the six-member APPG fact-finding mission in Bangladesh, which interviewed and discussed policy recommendations with stakeholders from the Bangladesh garment indsutry. 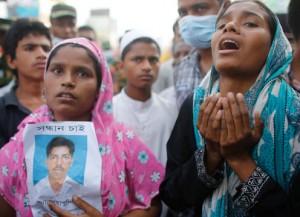 While acknowledging the economic success story of the RMG industry in Bangladesh, the study highlights the fact that vital changes have to be made to ensure its long term viability.

The AAPG expects the current Bangladesh Government and the incoming government after the next election to establish a comprehensive and long-term strategic plan to overcome the infrastructural challenges facing the RMG sector, including bottlenecks in transport and energy supply.

It urges the Western governments to use their influence to encourage the Government of Bangladesh to address labour rights, minimum wage levels, legislative enforcement, and the full implementation of Bangladesh’s National Tripartite Action Plan on Fire and Structural Integrity (NTAB).

It suggests the Bangladesh Government to establish a disaster relief and fire emergency plan, under direct ministerial responsibility with adequate designated funding.

Further, it recommends apparel brands to improve their transparency and control of supply chains, by publishing supplier lists as a matter of best practise.

“The possibility of introducing an ethical ‘kitemark’ on garments should be investigated in a way that is meaningful to consumers, that makes sense for brands, and that actually drives improved standards,” the report states.

To tackle poor purchasing practices, the APPG recommends that ethical trade targets should be included as a performance indicator for buying teams and individual staff as a matter of best practice, and buyers should be issued with codes of sourcing practice.