US President Barack Obama has urged President Vladimir Putin to seek a diplomatic solution to the crisis in Ukraine, in a lengthy telephone call.

In their hour-long conversation, the Russian leader said Moscow-Washington relations should not suffer. 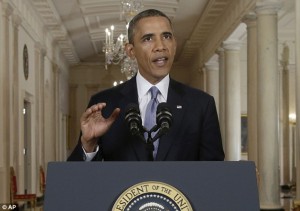 The crisis has led to a boycott by many foreign dignitaries of the Sochi Winter Paralympics, which open on Friday.

President Obama stressed to Russia’s president that his country’s actions in Crimea were a violation of Ukrainian sovereignty, the White House said in a statement.

He said there was a solution available that suited all parties, involving talks between Kiev and Moscow, international monitors in Ukraine and Russian forces returning to their bases.

For his part, President Putin said US-Russian “relations should not be sacrificed due to disagreements over individual, albeit extremely significant, international problems,” the Kremlin said.

It was the two leaders’ second telephone call concerning Ukraine in less than a week.

It comes after the EU and US joined Ukraine’s government in condemning as “illegal” a move by the Crimea region to set up a referendum to endorse joining Russia.

MPs in Crimea – whose population is mostly ethnic Russian – earlier set a date of 16 March for a referendum on the issue.

The EU, meeting in Brussels on Thursday, threatened “serious consequences” if Russia did not act to de-escalate the crisis.

Before the Brussels summit, some EU members – led by Germany – had indicated they preferred mediation with Russia to try to solve the crisis, rather than any stronger measures.

In a statement, the EU said it was suspending talks with Moscow on easing travel restrictions on Russians entering the EU.

It said that if Russia did not move to de-escalate the situation quickly, it would “decide on additional measures, such as travel bans, asset freezes and the cancellation of the EU-Russia summit”.

Speaking after the MPs’ vote in Crimea, President Obama said the referendum would “violate the Ukrainian constitution and international law”.

The US had earlier issued visa restrictions on a number of unnamed Ukrainian and Russian officials and individuals “to deny visas to those responsible for, or complicit in, threatening the sovereignty and territorial integrity of Ukraine”.

But correspondents say it may still be difficult for the EU to agree on tougher sanctions as most member states are keen to avoid economic conflict with Russia.

Several countries including the US and the UK have already pulled delegations out of the Sochi Paralympic Games in Russia in response to its military’s movement inside Ukraine.

Officials from the Ukrainian delegation will reveal whether the team will participate in the Games in a news conference at about 09:30 GMT on Friday.

In a televised address, Ukraine’s Interim President Olexander Turchynov denounced the Crimea referendum as “illegitimate and unnecessary, it contradicts the will of the Ukrainian people”.

He cited Article 73 of the Ukrainian constitution which says issues relating to borders must involve a “referendum across the whole of Ukraine”.

But Crimea’s First Deputy PM Rustam Temirgaliev said Crimea viewed the new authorities in Kiev as illegitimate and that Crimea was now in Russia.

Pro-Russian gunmen had moved in to seize strategic sites in Crimea after Viktor Yanukovych was ousted as the president of Ukraine following months of protests in Kiev.

The demonstrations – by Ukrainians seeking closer ties with the West – turned violent in mid-February with more than 90 people killed in clashes with police.