With the handover of land not being resolved as yet, fears have cropped up over the future of Yongone Group’s KEPZ in Anwara, Chittagong. Uncertainty over KEPZ will give out the wrong message to investors. South Korean ambassador to Bangladesh Lee Yun Young thinks that the answer to the problem lies in the agreement signed by the two countries for the expansion and maintenance of bilateral investment. Speaking to Prothom Alo in an exclusive interview at his residence on Saturday afternoon, Lee Yun Young expressed his opinion that, for the sake of friendship between the two countries, the decision to set up Bangladesh’s first private EPZ should be implemented speedily.

Prothom Alo: At a recent meeting chaired by the prime minister, a decision was made to take back KEPZ land. When did you officially learn about this? 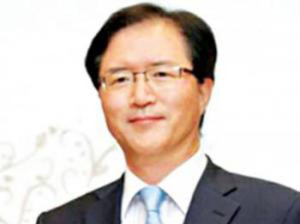 Lee Yun Young: I learnt about it from your newspaper. I haven’t come to know anything officially from the government as yet. We will ask the government about it. I think there is confusion about KEPZ development activities. If you go there, you will see the actual developments that have taken place. Of the 2500 acres of land given to KEPZ, 1200 acres has been legally given for development. So far development of about 1000 acres of land has been completed. Development on 83% of the land has been completed or is near completion. The government’s allegations that the KEPZ authorities have failed to develop the land over a long period of time, are not correct. Production has already started in the industries there. Shoes, readymade garments and other products are being exported from there. At the moment, over 10 thousand workers are employed their and this number will cross 20 thousand by the end of next year.

If the development work of the entire KEPZ is completed in the next five years, this will provide jobs to 100 thousand workers. It will be possible to export about Tk 100 billion worth of goods from the specialized export processing zone. Textiles are imported from China and other countries to manufacture readymade garments in Bangladesh. With this in mind, a high quality textile factory has been set up in KEPZ for the sustainability of Bangladesh’s readymade garment development.

Prothom Alo: It is heard that various countries and their renowned companies have been interested in investing in KEPZ. Who are on this list?

Lee Yun Young: There is Samsung and LG from South Korea, and several companies of Japan and India who have shown interest in investing. And recently diplomats of the US, Singapore, Malaysia, Turkey, Norway, Netherlands and other countries, after visiting the KEPZ, have expressed interest in investment possibilities too. They have particularly been attracted by the environment-friendly production facilities there. The ambassadors said they would encourage their investors to come here. They felt the success of KEPZ could be a model for Bangladesh’s economy. The success here could encourage others too.

Prothom Alo: You speak of the interest and eagerness of foreign ambassadors and investors. But the land complications haven’t been resolved. Did they raise questions about that?

Lee Yun Young: They certainly did. Whenever anyone has shown interest, they also ask about the land ownership. The uncertainty over this matter remains. KEPZ is named as the land owner in the notice, but when it comes to giving new investors a land lease, they have to run to the Chittagong deputy commissioner.

Prothom Alo: Is it because of the land problem that Samsung is not coming to invest here?

Lee Yun Young: This certainly is the main reason. Samsung Electronic started investing in Vietnam in 2009-10. Last year Samsung had about USD 25 billion in exports from Vietnam alone. Samsung’s success there has encouraged many South Korean companies to go to Vietnam. At the moment, 3000 South Korean companies have invested in Vietnam. Last year goods worth USD 132 billion were exported from Vietnam, of which Korean businessmen exported USD 40 billion.

Lee Yun Young: Samsung hasn’t given any final decision about not investing in Bangladesh. But it is hesitant at the moment.

Prothom Alo: What message will the uncertainty over KEPZ give to the investors?

Prothom Alo: How would you view the entire matter in the context of relations between the two countries?

Lee Yun Young: We aim at being partners in Bangladesh’s economic progress. Over 35 years, South Korean investors have played a role alongside Bangladesh’s businessmen in taking the readymade garment industry ahead. That is why we share the pride in Bangladesh being the second largest readymade garment exporting country in the world. At the beginning, other than South Korea, no one came forward, nit China, India or anyone. That is why in both a symbolic and in a real sense, KEPZ is extremely important. After the success of readymade garments, we want to see another success story of Bangladesh through KEPZ. After all, we are the top in electronics, ship building and many more industries. Partnership between the two countries can add a new dimension to our success.

4 Bangladeshis among the dead in Beirut.

No change likely after the pandemic.