The US Ambassador in Dhaka, W Dan Mozena emphasized on joint efforts of world’s democratic nations to curb terrorist financing and money laundering.

“The best way to win this battle against the terrorists is for the democratic nations of the world to work together to deny these terrorists the money they seek to finance their war on us,” he said while addressing the launching of a training for non-financial businesses and professionals. 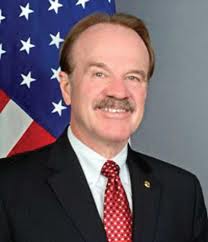 The training was jointly organised by Bangladesh Bank (BB) and US Department of Justice’s Office of Overseas Prosecutorial Development (OPDAT) at a city hotel on Tuesday, reports UNB.

Officials from the central bank, Anti-Corruption Commission (ACC), Bangladesh Police’s Criminal Investigation Division (CID), the National Board of Revenue (NBR), prosecutors from the ACC and private sector attorneys, accountants, precious metal and stone dealers are participating in the training.

Mozena said Bangladesh as the world’s 7th largest country in terms of population is an important partner in the global battle to slash financing for terrorism.

“The government must now undertake in-depth risk assessments in certain financial sectors, and it must increase coordination among various government ministries and agencies in investigations of money laundering and terrorist financing,” he recommended.

“Bangladesh’s public and private sectors must work together to build their capacity to relentlessly combat money laundering and terrorist financing,” he added.

The function was also addressed by BB governor Atiur Rahman.