During last Ramadan, Western Union (WU), along with Bangladesh Krishi Bank (BKB) made the wishes of five individuals come true under a promotion simply and appropriately titled “Wish come true”. After a selection process that covered the entirety of Bangladesh, individuals were chosen as winners based on their answers to the question of what is their biggest wish. The five winners were selected based on the uniqueness, sincerity and warmth of their answers. Each winner received a considerable financial sum that will enable them to fulfill their special wish. The promotion was not only fitting for a time of giving such as Ramadan, but also strongly reflected the brand ethos “Moving Money for better” of The Western Union Company (NYSE:WU), a leader in global payment services. 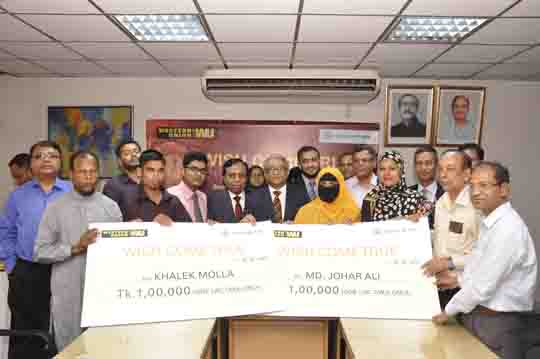 Under the Western Union® Wish Comes True promotion, anyone in Bangladesh was eligible to having their special wish fulfilled and no purchase or transaction was required from them in order to qualify.

A total of 5 winners were selected and ceremoniously celebrated after the promotion ended. Among the winners -Md. Shamim Ahmed, Md. Johar Ali, Kohinur Akter, Hosna Ara Begum, and Khalek Molla took their award from Bangladesh Krishi Bank. Their wishes ranged from purchasing a motor vehicle to take one’s children to school to setting up a computer lab to educate and teach local children. Western Union, along with Bangladesh Krishi Bank made these wishes come true.