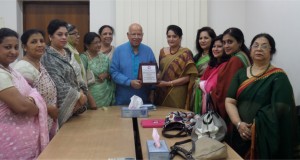 BWCCI President Ms. Selima Ahmad thanked Honorable Finance Minister for the continuation of 100 crores taka as grant for women entrepreneurs as well as the announcement to extend the credit facilities to women entrepreneurs in the national budget 2014-15 and for the initiative taken very recently to develop a separate women entrepreneurship development policy. She informed the minister about BWCCI’s latest endeavor ‘Empower 5000’ and said that BWCCI has undertaken this new venture to graduate 5000 micro women entrepreneurs to SME level by 2020 through engaging them more into mainstream diversified business sectors with a view to make Bangladesh a mid income country. She then handed over the keynote of ‘Empower 5000’ along with a crest to honorable minister and expressed hope that the government will extend every support to materialize this.

Giving his speech Honorable Finance Minister Mr. Abul Maal Abdul Muhith said that the Government is committed to implement women development policy fruitfully. He stated that in last one decade, women entrepreneurs in Bangladesh has developed themselves considerably and has made notable contribution in the national economy. He said that on behalf of the government his ministry would continue to support initiatives that promote women entrepreneurship development.