Commerce Minister Tofael Ahmed was the chief guest of the program while Abdul Matlub Ahmad, President, FBCCI was the special guest and Mahmood Hossain, Chief Corporate Affairs Officer participated at the event as guests of honor. 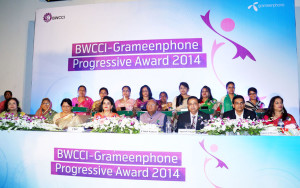 In addition to this, 500 women entrepreneurs from all over the country, donor representatives, bank personnel, media representatives, civil society people and directors of BWCCI Board were also present in the program.

This year 7 women entrepreneurs from 7 divisions who are also BWCCI members are awarded for their significant achievement in business; they were Maksuda Khatun from Barisal division, Nurun Nahar from Chittagong division, Shahida Parvin from Dhaka division, Kaniz Sultana from Khulna division, Asma-Ul-Husna from Rangpur division, Mst. Hosna Begum from Rajshahi division and Reshma Sharmin Juthi from Sylhet division. With them, 2 media representatives also received award this year for their contributions towards women entrepreneurship development in the country who are –Sima Bhowmik, Staff Reporter from Jamuna Television in electronic media category and Kamrun Nahar, staff reporter from the Financial Express in print media category. Honorable industries minister Mr. Tofael Ahmed handed over the awards to the winners which included a trophy, a certificate and prize money of Tk 25,000.

Giving her speech BWCCI’s President Ms. Selima Ahmad said that half of the country’s population is women who are contributing significantly to the whole development; but they are also the main victims of violence and discriminations in the society. She said though despite all hurdles number of women entrepreneurs is increasing but they are failing to move forward due to proper financial and policy support. She requested the Government to give 50% discount on stalls in Dhaka International Trade Fairs to women entrepreneurs. She also said that women development policy of Bangladesh is an example to others in the world. She demanded to arrange ICT trainings for 5000 women per year which will help our women to be more successful in their businesses. She also requested to include women entrepreneurs in business delegation.

Congratulating all the winners, commerce minister said that women as entrepreneurs have established their position in the areas of women development. Mentioning that BWCCI’s initiative to inspire women entrepreneurs through progressive award is indeed praiseworthy, he said that BWCCI is making great contribution in bringing women economic empowerment in the country. He said to discount 50% on stall/pavilion fee in DITF for women entrepreneurs, He mentioned that ICT trainings should be provided to women entrepreneurs. He also informed that by 2021 33% member of parliament will be women.

Special guest Mr.Abdul Matlub Ahmad, President, FBCCI and Chairman of Nitol Niloy Group assured in his speech to help BWCCI in all respects. Along with Mr. Mahmood Hossain, Chief Corporate Affairs Officer, Grameenphone Ltd and BWCCI board members also delivered their valuable speeches and committed to continue their support in promoting women entrepreneurship.