Grameen Bank founder Dr Muhammad Yunus has not been enjoying the respect he deserves in his own country, said German Ambassador to Dhaka Dr Albrecht Conze.

“It saddens me that the distinguished pioneer of microfinance and social business has not been enjoying the respect he deserves in his own country lately,” the German diplomat came up with the remark when he met Prof Yunus in Thursday morning to convey an invitation by German President Joachim Gauck to visit Berlin early next year. 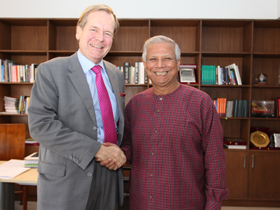 During the meeting, the German envoy recalled that Yunus’ ties with Germany and its people go back a long way.

He also said that Germany admires Yunus’ outstanding contributions to improving the lives of the most vulnerable and marginalised people, especially women.

Conze also praised Yunus’ leadership in the Garments Industry Transparency Initiative (GITI) which aims to find a consensus on appropriate procedures to regularly adjust minimum wages for garment workers as part of a global effort to deal with labour wage issues.

GITI is a joint initiative by Professor Peter Eigen, the founder of Berlin-based Transparency International (TI) and Professor Yunus.

“Dr Yunus has been instrumental in shaping the GITI which attracted considerable attention in Germany. It’ll contribute towards enhancing Bangladesh’s international reputation after the negative publicity the country has received since the Rana plaza tragedy,” Conze said.