The BM container depot at Sitakunda, which is located in Chittagong, has become a graveyard as a result of the horrific fire. On Saturday night, at about 11 o’clock, the fire got started. Last night, after almost 25 hours of fighting, the fire was finally brought under control. In the meantime, the fire claimed the lives of a total of fifty individuals. Nine of them were firefighters or other members of the Civil Defense. It is estimated that around five hundred people were hurt. This terrible blaze has burned massive amounts of imported and exported goods, covered vans and lorries, and chemical storage facilities along its path. The horrifying nature of the scenario caused the individuals in the area to react in a fearful manner. In an effort to get the blaze under control, army personnel joined up with firefighters. Dhaka was the location from where the special team was sent. The President warned that in the case of an emergency, such as a fire, Abdul Hamid, Sheikh Hasina, and Shirin Sharmin Chowdhury have all sent their condolences after the passing of their colleague.

Two of the firefighters and seven others were transported to Dhaka by air ambulance when they were in serious condition. She is now a patient at the Sheikh Hasina National Institute of Burn and Plastic Surgery in the nation’s capital. As a result of the presence 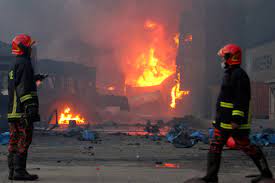 of wounded people and the people who care for them, the atmosphere at a number of hospitals, including Chittagong Medical College and CMH, became tense. According to the fire department, the queue of corpses might be much longer. The fire is now being fought by both firefighters and soldiers from the military. The residents of three different villages located around the depot were frightened as a result of the explosions and fires. Five official and non-official groups have been set up to look into what caused the disaster.

The container depot, or dry port, at Shitalpur in Sonaichhari in Sitakunda, was the location where the fire started at around 8:30 o’clock last Saturday evening. At 11:15, there was a tremendous explosion occurred. At this moment, a terrifying circumstance developed in the vicinity a few kilometres away.