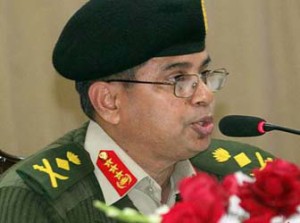 Shafiul Huq will replace General Iqbal Karim Bhuiyan as he retires on June 25.

Iqbal Karim was appointed the Army Chief on June 7, 2012 and he took over the charge on June 25.

Earlier on June 4, the government appointed Air Vice Marshal Abu Esrar the new chief of the Bangladesh Air Force (BAF). He will assume office on June 12 next.