Adoption of organic farming can become the major solution to improve the soil alongside ensuring the farmholders with better profit margin and consumers with the quality food,  claims scientists at the Bangladesh Agriculture Research Institute (Bari).

Began in 2006, a field trial of organic farming over 33 decimal land at Bari has led to the doubling of the organic matter content in the soil that has also resulted in the reduction of input requirement and improvement of the quality of the crops and vegetables compared to those produced by a chemical input dependent method.

Over the last seven years of the field trial, the organic matter content in the soil was increased from 1.14 percent to 2.79 percent, while the cost of farming has similarly been reduced, found out tests done by the Horticulture Research Centre at Bari, reports UNB. 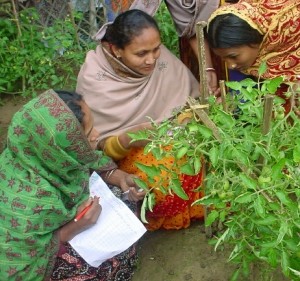 Talking to UNB, Bari scientific officer (Olericulture Division) M Nazim Uddin said he is trying to develop a low input, but optimum output model with the trial of the organic farming.

The organic farming is saving about 25 percent of the cost of fertilisation and pest control compared to the cost of the chemical input dependent farming, he said.

“First, we’ve adopted the principle of mixed culture. Right now you can see 16 crops and vegetables coexisting in the trial field,” he said, adding, “Mix culture creates natural barriers for insects and weeds.”

“Look, we’re growing coriander, sweet maize and grass pea along the four sides of the plot. Coriander will act as the barrier crop as it will attract insects first and put barrier to the spread of non-persistently transmitted aphid-borne viruses.”

“I’ve not yet used the Neem juice spray along the border which is use to drive away insects from the crops inside the border. I want the insects to have some feeding of the coriander which will wash out the viruses of the mouthparts of the insects,” he added.

“The reason I’m planting the sweet maize is basically its higher cash value. And it’ll not hurt the intake of the cabbage and coriander beside it because of the factor that the nutrient intake zone for its roots are located deeper,” he continue.

Inside the field, Nazir is experimenting the intercropping of red spinach, potato, cauliflower, lettuce, tomato, etc. in two ways – in lines prepared by hand digging of the topsoil with spades, and in patches of the soil covered by hyacinth mulching.

Nazim noted that the mulching disturbs the soil the less and requires less organic input from outside compared to the lines.

“In lines also, the red spinach will ensure an income in a month to the farmer, while acting as a cover crop to prevent the weeds on the topsoil. We’re also planning marigold side by side with the tomato plants. Marigold is considered a cover plant to prevent nematodes” explained Nazim, “Its bio-fumigation we’re practicing here.”

For the fertilisation, the Bari trial is using vegetable wastes, poultry refuse and cowdung. “Absence of chemical fertilisers and pesticides over years have led to the increase of different soil microbes, including the blue-green algae, in the plot,” said Nazim.

Microbes are biological properties of soil and functions to added organic matter in the soil in their lifecycle. Organic manures also increase the water holding capacity of the soil, he added.

“So, you end up with less irrigation cost, less fertilisation costs day by day. Our plots now requires one fifth of the irrigation required by plots cultured with chemical inputs. Besides, those chemical dependent lands are enduring more weed attacks than our land,” Nazim said.

“We’re also cropping rice in one season. We’re farming the crops and vegetables more intensively compared to that of the conventional line method. It leaves less scope for the weeds to grow, and more scope for the soil to augment organic matters by the cultivation of grass peas,” he continued.

The model also involves designating a corner of the plot for the growing of seeds of the plants.

The most encouraging output of organic farming is that it improves the organic content of the soil, as opposed to the robbing the soil off its organic content under chemical fertilization and pest control, Nazir claimed.

According to Soil Resource Development Institute (SRDI) records, about more than 1,200,000 hectares land of the country’s land area has become deficient in organic elements over a decade since 1998.

In the 1970s, less than 25 percent of the country’s land mass was deficient in organic matter, said Md Moqbul Hossain, a principal scientific officer at the SRDI.