According to economic survey 2019-20 Bangladesh has a population of 1125 people per square kilometer, making it one of the most densely populated countries in the world with only a few hectares of arable land per capita. The amount of cultivable land is decreasing day by day as a result of continuous population growth, writes Makama Mahmud Chowdhury

We get up in the morning to cultivate the soil,

Golden stick of ripe paddy grows by our toil.

We get sweaty in the sun, when the seeds are sown,

The rain comes down from the sky and anxiety gets blown,

Smiling wife comes there in a while,

She brings a bowl of panta rice with a smile.

Bangladesh is known worldwide as a major agricultural country. It is undeniable that golden crops are grown here. As per data showed by Bangladesh Economic Survey 2019 we found that about 40.6% of the total workforce in Bangladesh is engaged in agriculture. According to the Bangladesh Bureau of Statistics, 46.61% of households of the country are dependent on agriculture. Besides, the World Bank says, agriculture is the source of income for 87% of 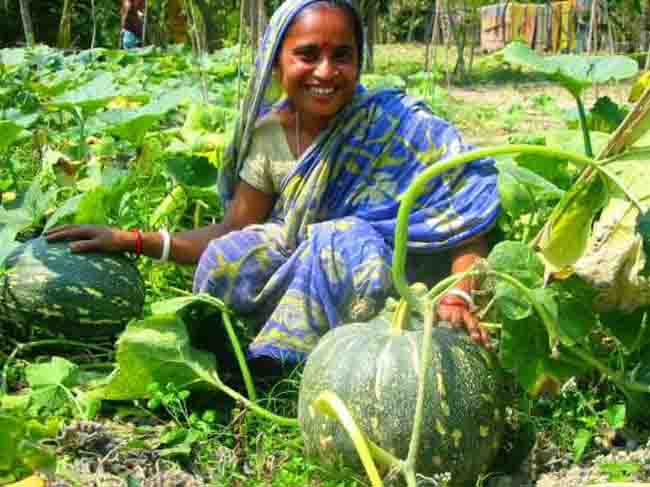 rural people in Bangladesh. The country’s GDP growth comes mostly from 5 sectors of which agriculture is the best one. The contribution of agriculture to the gross domestic product (GDP) of Bangladesh is 16.6%. So it can be said that Bangladesh is still a major agricultural country. Our farmers work hard to produce a variety of agricultural products. After meeting the demand of the country, we earn a lot of foreign exchange by exporting the surplus of those products abroad and import factory equipment, necessary raw materials and consumer goods for industrial development.

According to economic survey 2019-20 Bangladesh has a population of 1125 people per square kilometer, making it one of the most densely populated countries in the world with only a few hectares of arable land per capita. The amount of cultivable land is decreasing day by day as a result of continuous population growth. In the Corona situation it has now turned into a terrible problem for the country. Economists have long predicted that our future generations will face a severe food crisis. Two hundred years ago, economist Thomas Malthus in his widely known population theory depicted the future of a world plagued by food shortages. He identified the inconsistency between the geometric rate of population growth and the mathematical rate of food production as the cause of the impossibility of the food crisis. Although the growing food crisis in the world is not happening directly in the context of population growth, the corona virus has appeared in a different context with the ominous sign of the severity of the food crisis.

Although the total geographical area of Bangladesh is about 56,960 square miles (1, 47, 570 sq. km) the amount of cultivable land is only 8 million hectares (2018). At present, the population rate of the country has multiplied, but the amount of cultivable land has decreased by at least 30 percent. Even then the farmers of our country are working regularly to increase the production of food grains. They are launching a green revolution to ensure food for all and protection of self-reliance in the food sector. However the saddest thing is that they are still largely deprived of purchasing new techniques and mechanical equipment invented for agricultural work due to their high cost and maintenance. Bangladesh lags far behind the developed countries in the use of technology in the agricultural sector. Even in many least developed countries where modern technology is blessed to increase crop production, due to farmers’ ignorance, inexperience, costliness and reluctance to use advanced technology they are failing to reap maximum benefits of the agricultural system through modern instruments.

Due to the lack of modern technology and equipment in the agricultural sector, the farmers of Bangladesh are going through a difficult time due to the labor crisis. Lack of labor is one of the major problems facing the agricultural sector in our country in recent years, which has become a major obstacle for farmers to harvest during the harvest season. Every year newspapers, online news portals and TV channels are flooded with news of labor shortage. When farmers have to collect crops, they are forced to keep their ripe paddy in the land due to lack of labor. They accept the same situation while sowing seeds also. The result is an increase in labor costs which adds logistics to increase production costs. Farmers do not feel relieved even after harvesting. They have to fight again to get a fair price for their crops. It is often seen that they fail to collect the money spent on crop production. Due to this situation, some farmers, especially the younger generation, are losing interest in agriculture. Thus, it can be said that agriculture, which is known as the lifeline of the economy of Bangladesh, is now in the life support condition.

Hundreds of modern agricultural machineries have been introduced in other countries of the world. Farmers in developed countries are using them and reaping the full benefits. But our farmers in most cases have very little knowledge about the advent of new technologies and equipment. Thus, the use of such tools is limited. Moreover, most of the farmers in our country belong to the low-income group. They cannot afford to buy these equipment and use or apply these technologies on their farms. Also they are not confident enough in using these tools. So, they continue to cultivate the crop manually i.e. following the previous rules, which ultimately reduces the production rate.

Compared to other departments of the government, the Department of Agricultural Extension has brought these aspects of agriculture under better scrutiny. They are helping to improve our agriculture by inventing a variety of high yielding crops and supplying them to farmers. It is also noteworthy that the government has now taken up various projects. The government is providing financial assistance to agricultural machinery importers. But if we do not make the farmers aware of the modern machinery, the situation of the farmers will not change at all. Key-level officials of the Department of Agricultural Extension should inform the farmers about the blessings of modern agricultural technology and help them to put it into practice.

Makama Mahmud Chowdhury is a student, Chittagong University of Engineering and Technology.