The Asian Human Rights Commission (AHRC) has written an open letter to UN Assistant Secretary General Oscar Fernández-Taranco for UN intervention in normalising the situation of Bangladesh, as soon as possible, for the sake of saving lives, livelihood, and liberty of a poverty-stricken nation.

Signed by AHRC Executive Director Bijo Francis, the letter was sent to Taranco on the eve of his crucial visit to Bangladesh when the country plunged into deep political and constitutional crisis. 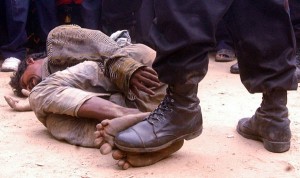 The Hong Kong based human rights watchdog said, we are aware of the UN’s appreciable role in holding elections in Kenya, which was in a civil war in the last decade. The UN must play a key role in holding a credible and transparent election in Bangladesh drawing upon its experiences in Kenya and other countries.

Describing the situation in Bangladesh, AHRC said that the police, paramilitary forces and other law-enforcing agencies are randomly opening fire pointing guns toward the protestors who belong to the opposition. Endless political violence reigns all over Bangladesh which is literally disconnected from the rest of the country, by political blockades.

The AHRC said in its letter to Taranco, the state agencies have illegally arrested a number of senior leaders of the main opposition, without any provocation from the latter. The prisons of Bangladesh are now overcrowded with detainees to more than three times their actual capacity. The prisons and detention centres not only accommodate the convicts of crimes, but also house a large number of pro-opposition activists, newspaper editors, journalists, lawyers, human rights defenders and ordinary citizens in fabricated cases, to satisfy the wish of the ruling authorities.

The Election Commission (EC) of Bangladesh has been reshuffled by the government. Those who are loyal to the incumbent government are recruited to head the EC, which has also recruited the pro-ruling party activists in the field level offices across the country, AHRC said.

The EC has complied with the government to weaken the electoral procedures when at least 28 provisions of the Representation of Public Order (RPO) were amended by the government. The delimitation of the constituencies of the parliamentary seats has allegedly been made for the convenience of the ruling parties’ contestants. Electoral offences can hardly be adjudicated by the EC under the changed RPO. The EC’s ability of guaranteeing a transparent and credible election has now been reduced much more than ever before. However, they have announced the schedule of election, hurriedly, without taking all the opposition parties in confidence, allegedly to please for pleasing the ruling alliance parties.

By repealing the provision of ‘Non-party Care-taker Government’ in the Fifteenth Amendment of the Constitution of Bangladesh, the incumbent Prime Minister Sheikh Hasina, has created a crisis to perpetuate her power. All power of the state is centred, possessed and implemented as per the direction of the Prime Minister, according to the current edition of the Constitution. The Supreme Court was previously used by the Government to make the Fifteenth Amendment of the Constitution. Constitutional interpretations by the jurists are being replaced by the version of the Premier. Prior to the general election candidates having capacity to exercise muscle power are chosen by the ruling party so that the ordinary voters are panicked either to vote in favour of the ruling party or abstain from casting their votes.

The feuding political parties are waging war against each other using the state agents and non-state actors to establish their muscle power. Both political groups are well aware of the powerlessness of the Election Commission. Nobody in Bangladesh believes that the existing Election Commission is capable of holding a credible and transparent general election, as scheduled on January 5, 2014.

The government provokes the opposition to retaliate violently so that the latter’s public standing is gravely damaged, which may benefit the ruling parties, despite the loss of public legitimacy due to endless corruption and misrule for the last five years. Subsequently, the situation has become violent resulting in numerous deaths; and physical, psychological, economic, educational and social impairments and impediments.

Amongst human rights defenders, those who want to step forward with commitments of documenting the gross abuses of human rights are under constant surveillance, with imminent threats of further arrest, detention and custodial torture at the hands of the law-enforcement agencies that have a reputation of maintaining a torturous system.

A few members of civil society who have dared to criticise the lawless and unconstitutional actions of the government, and the Prime Minister in particular, have been facing death threats from unknown callers or criminal attacks on their residences and vehicles on the streets.

The situation has compelled the spokespersons of the opposition to go into hiding to avoid arrest, detention and torture. The space for a dissident voice has been reduced to such a non-existent level that the opposition leaders are video-recording their statements from undisclosed places and disseminating them to the media and to the public through modern technologies.

Being a party to the International Covenant on Civil and Political Rights the Government of Bangladesh has an obligation under Article 2 to take ‘administrative , legislative and judicial’ initiatives to guarantee the rights of the people. Sadly, it is not agreeing to create a level playing ground for the upcoming general election.

The authorities appear to be determined to hold a farcical election excluding the major parties. The excuse of ‘protecting the constitution’ is not going to solve the problem on the ground, the letter includes.