The Asian Human Rights Commission (AHRC) in a statement on Monday said, Bangladesh appears to be heading toward a bloodbath, unless relevant local and international stakeholders intervene to break the trend of political violence and censorship. AHRC also said, in the wake of the threats made by the Bangladesh Commerce Minister, the Asian Human Rights Commission has reason to fear increased violence across Bangladesh. 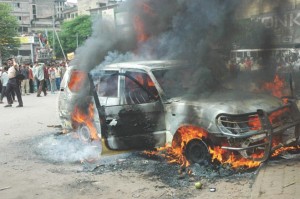 The Asian Rights body said, in recent weeks, the Bangladesh government has intensified its crackdown on the media and the opposition. The country’s media is being forced to censor the news and plight of opposition parties, amidst the spree of arbitrary arrest and detention of opposition supporters.

The police raided the office premises of New Age, a national English daily, on the evening of 28 December 2014 without just cause, and threatened the journalists with “dire consequences”. On 7 January 2015, Mr. Abdus Salam, Chairman of Ekushey Television (ETV), a private TV channel, was arrested. Detained, he has now now been remanded for five days in a “pornography” case; no complainant has officially accused Mr. Salam and the police do not have evidence to merit this action. Notable, too, is a High Court Bench ruling on the same day against the publication or broadcast of any statements by Tareque Rahman, son of former Prime Minister Khaleda Zia, who is also Senior Vice-Chairperson of the Bangladesh Nationalist Party (BNP).

Since 27 December 2014, all peaceful protests and rallies by opposition leaders have been banned in Gazipur District. In Dhaka, Section 144 of the Code of Criminal Procedure, 1898, has been imposed to officially ban all forms of public meetings. The opposition had been seeking to commemorate the 5 January 2014 fraudulent elections with public protests. Not just a ban, since the night of 3 January 2015, the police have even confined former Prime Minister Khaleda Zia to her office at Gulshan in Dhaka. Trucks laden with sand, brick, and timber have been seized and parked around this building to cordon off the opposition leader. The main gates of Khaleda’s office are kept locked to restrict her from participating in public programmes.

Only the ruling party and its allies are allowed to hold public meetings in the Bangladesh. The Dhaka Metropolitan Police has granted permission to the Bangladesh Awami League, the ruling party, to hold a meeting today, 12 January, having continually denied the opposition their right to do the same.

Having being repeatedly denied the right to hold meetings, the opposition has called for an indefinite countrywide oborodh (blockade). This opposition blockade commenced a week ago. Violent clashes have since been reported from different parts of Bangladesh. Numerous skirmishes between the police, who are often accompanied by the ruling party supporters, and opposition activists have been reported. At least a dozen people have lost their lives due to police firing and arson attacks in last week. Hundreds of opposition activists and innocent citizens have been arbitrarily arrested and implicated in different criminal cases.

The incumbent government is illegitimate in the eyes of many citizens, as it lacks a people’s mandate, having clung to power though the farcical January 2014 election. The government maintains a hardline stance against public demands for a fresh election conducted through a credible and transparent electoral process. Instead of responding to public demands, the authorities have been relying on law-enforcement agencies, and these agencies are shooting down protesters in the streets.

Mr. Tofail Ahmed, Commerce Minister of Sheikh Hasina’s Cabinet, has asserted on 11 January that the government will deal with opposition the way the “Naxalites” were dealt with in the 1970s. The Minister reportedly said, “…BNP would meet the fate the Naxalites did after the country’s liberation in 1971….” The alleged Naxalites, the Minister is referring to, were extrajudicially murdered by law-enforcement agencies. This statement of Bangladesh’s Commerce Minister, who is also a senior leader of the ruling Bangladesh Awami League, indicates the chilling reality of Bangladesh today, and portends what is to follow.

AHRC therefore said that the country appears to be heading toward a bloodbath, unless relevant local and international stakeholders intervene to break the trend of political violence and censorship. In the wake of the threats made by the Commerce Minister, the Asian Human Rights Commission has reason to fear increased violence across Bangladesh.