Bangladeshis across the world, mostly youth — have reacted furiously to new Bollywood film “Gunday” — directed by Ali Abbas Zafar — after it was found out that the film misrepresented the birth of Bangladesh as a result of an “India-Pakistan War”, and undermined Bangladeshis in its storyline. Connected and unified through social networks, youths have been pressing Yash Raj Films — one of the most illustrious production houses in the industry, that is behind the film — to remove that part and apologise for tweaking history. 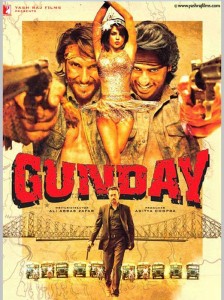 Released on February 14 in India, the action crime-thriller’s opening narration is set in Kolkata in 1971, and mentions that “Bangladesh is born as Pakistan surrender on December 16 at the end of the Indo-Pak War”.

The film also apparently indicates that Bangladeshis were involved in various crimes like arms smuggling, and two young boys from these lands escaped and became vicious criminals. There’s also insinuation that Bangladeshis prefer identifying themselves as Indians.

As the news spread over Facebook, Bangladeshi youth strongly condemned the matter, and shortly after, organised an online campaign, sending petitions to the films production house, and bringing the matter to notice of everyone on the Internet.

The campaign plan includes e-mailing a protest letter to Yash Raj’s official account, their vice president, as well as flooding the social media presences of the production house, and the film, on Facebook .

The message politely and cordially addresses the Yash Raj authority, summarily pointing out that India joined Bangladesh’s War of Liberation on December 3, 1971, whereas the war has been going on since March, and three million people were martyred. It also addresses the undermining of Bangladeshis in the story, and asks for an apology and change in certain parts of the film.

A social campaign is also underway on micro-blogging platform Twitter, with the hashtag #GundayHumiliatedHistoryOfBangladesh.

Although there has been no official response from Yash Raj Films, the film’s producer Aditya Chopra or director Ali Abbas Zafar on the issue, synopses of the film online have been edited to mention that Bangladesh was born after the war of 1971, and the film’s Wikipedia page very cautiously mentions there might be scope for a ‘misunderstanding’ regarding the historic facts.

This may not have been the first time Bangladesh has been looked down on or portrayed negatively in a film overseas, but the youth of the country, fully aware of the power of the connectivity of social media and getting its patriotic voice heard — driven as a result of an ‘awakening of spirits’ last year — have made sure the matter does not go unnoticed.