The authorities has planned to ensure tight security measures in and around the Central Shaheed Minar, keeping the recent audiovisual message clip of al-Quaeda in mind, police said. 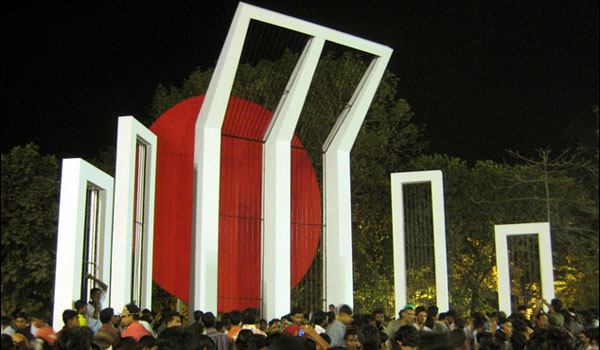 “Like previous years, all necessary security arrangements will be ensured in the capital for smooth observance of the Shaheed (martyred) Day and International Mother Language Day on February 21 this year,” Dhaka Metropolitan Police (DMP) Commissioner Benazir Ahmed told this at a press briefing at its headquarters this noon.

He said, “The issue al-Quaeda and militant outfits has become a world problem right now; but the soil of Bengal is not fit for them.”

However, the members of law enforcement agencies, DMP commissioner said, are keeping close eyes on the issue and investigating whether Bangladesh Jamaat-e-Islami (JI) has any link with al-Quaeda.

About security arrangement on the 21st February, he said there was no reason for the city dwellers to be worried while visiting the Central Shaheed Minar to pay homage to the language martyrs as all out measures have been taken to maintain law and order.

Besides the regular forces, there will be police in plainclothes, on rooftops, on patrol and striking force on the standby while members of women police in plainclothes, a bomb- disposal team and dog squad, SWAT (Special Weapons And Tactics) and mobile patrols — will be deployed. “As many as 57 closed circuit television (CCTV) cameras will be on watch from Palashi to the Shaheed Minar and 28 security stops will be posted on way to the altar,” Benazir added.

Last year, around 8000 members of law enforcing agencies were deployed on the occasion while the number of this year is yet to finalize by tomorrow (Wednesday), said a spokesman of DMP media cell.

Security will also be tightened at other key points of the city, including Dhaka University campus and diplomatic zones to prevent any subversive activities.

The DMP commissioner urged all to maintain the sanctity of the Central Shaheed Minar and remain alert against any type of indiscipline.