Bangladesh has demanded immediate implementation of Cancun Adaptation Framework (CAF) as adaptation for Bangladesh as a climate change victim is urgent priority.

“We want to see immediate implementation of CAF because adaptation is an urgent priority for as a climate change victim like Bangladesh,” said Shafiqur Rahman Patwary, head of Bangladesh delegation to Warsaw Climate Change Conference 2013 being held at Warsaw in Poland. 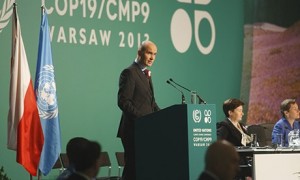 Speaking at a plenary session Shafiqur Rahman, who is also environment and forests secretary, stressed the need on reaching a legally binding agreement (LBA) for mitigation and adaptation of the impacts due to climate change, reports BSS.

“Human kind will face a severe threat of existence if LBA is not enforced from 2020,” he added.

He said Bangladesh has prepared “Bangladesh Climate Change Strategy and Action Plan” and undertaken a self-financed project at a cost of US$385 million. Side by side, Bangladesh has been implementing separate programme with financial support from donor countries and agencies for adaptation and mitigation.

Expressing his satisfaction about the progress made in Warsaw Climate Change, he hoped that the conference will reach a consensus on an international mechanism to face challenges of loss and damage.