The revenue collection by Chittagong customs house witnessed a shortfall of Tk 25.41 billion, as it collected Tk 233.49 billion against the revenue target of Tk 258.90 billion in the 2012-2013 FY due to political instability, although the collection crossed the targets in previous fiscal years.

Chittagong Customs House, the highest revenue earner of the country, could not meet the target of revenue collection in the five months of the current fiscal year due to repeated hartals and violence amid political instability. 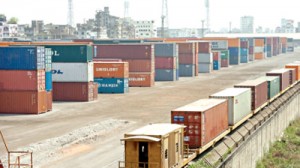 In all the first four months of the current FY (July to October), Customs House witnessed a revenue shortfall which is increasing gradually, reports the Daily Sun.

The revenue collection stood at around Tk 74.72 billion against the targeted revenue of Tk 82.24 billion in the first four months (July to October) of the current fiscal year.

Customs officials feared that if such situation continues, the revenue collection would be far behind the target of Tk 256.15 billion set for the current FY.

Sources said goods could not be transported from the Chittagong port to other parts of the country due to forced suspension of vehicular movement along the highways during hartals.

Besides, the repeated violence on Dhaka-Chittagong highway — the country’s economic lifeline — seriously hampered transportation of goods from Chittagong port to other parts of the country recently.

The opposition BNP-led 18 party alliance men on different occasions and reasons vandalised hundreds of vehicles, set over 100 on fire and put up barricades frequently on the highway, creating panic since the beginning of the year.

The import also decreased following the political unrest, leading to an increase in the gap between the target and collection, he said.

“If the unrest continues, it will be tough to earn the targeted revenue in the FY and it will surely have a negative impact on the country’s economy,” he observed.