“Certified arsenic-free”. The traveller, new to Bangladesh and taking out a bottle of drinking water with this strange label from their hotel fridge, may smile in puzzlement. “Oh well, that’s all right then.” But unless they are keen readers of specialist journals on geology and water engineering, the chances are this is their first inkling of what the World Health Organisation has described as the “largest mass poisoning of a population in history”.

Dhaka, the heaving, ramshackle capital of 17 million people, is spreading its concrete tentacles ever outwards across the flat riverine plains of the Bay of Bengal in this country squeezed between India and Myanmar. There’s an in-your-face vibrancy about Dhaka, a smiling 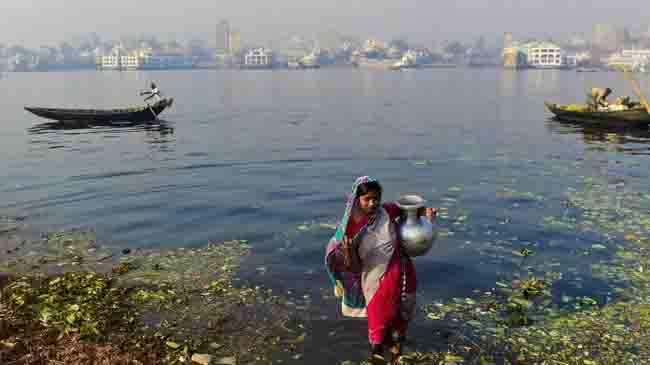 resilience against all the odds of its manifold pollutions and adversities – the choking traffic, the sprawling slums, and groaning infrastructure. On the plus side, Bangladesh is something of a development success story. Poverty has been reduced, and it outclasses its economically stronger neighbour India in most health and human development indicators.

But development has come at a price. The tanneries of Dhaka, which produce the finished leather that provides a significant source of export earnings, pump their noxious dyes into rivers. Farmers responding to the growing demand for fruit and vegetables in urban and regional markets overuse pesticides. Contamination of food is shockingly ingenious – formaldehyde to preserve fresh fish and fruit, industrial dyes to colour processed goods. Rules and structures of accountability exist on paper, but legal enforcement is poor, officials easily bought or silenced.

But arsenic, that’s a tragedy of a different dimension. Up to half of the population of this country of over 150 million people are exposed to arsenic poisoning. The World Health Organisation’s “safe” level for arsenic in drinking water is 10 micrograms per litre. In most of the affected areas of Bangladesh the level of arsenic in groundwater is more than 50 micrograms per litre. Levels over 500 micrograms are common. Arsenic kills an estimated 40,000-50,000 Bangladeshis every year.

Just how did it come to this? It began well. In the 1970s, after Bangladesh emerged as a sovereign nation on its independence from Pakistan, a large-scale programme was undertaken to construct deep tube wells for irrigation to increase agricultural production. It was very successful, helping to turn Bangladesh from a major importer of food to feed its people to relative food self-sufficiency. The UN and other international agencies then turned their attention to adapting this technology to provide clean drinking water.

For generations, Bangladesh’s mainly rural population had taken its domestic water from ponds and tanks. This surface water was a major contributor to sickness and deaths from diarrhoea and other waterborne diseases, especially among children. Groundwater, on the other hand, is bacteriologically pure. Indeed, it comes out looking clean and sparkling. The agencies had spotted an opportunity.

Answering the call of nature: Bangladesh stops open defecation in just over a decade

Over nearly three decades, millions of tube wells for domestic water consumption were dug, equipped with specially adapted pumps. People switched enthusiastically to this new technology as it also saved on labour, for women in particular. Over that period, infant and child mortality rates more than halved. The shift from drinking surface water to groundwater played an important role in the rapid decline in morbidity and mortality from waterborne diseases.

But over the decades it also became clear that there was something deadly in this water. The first reports of strange sicknesses had come from over the border in India in the 1980s, where tube wells were also common. Doctors noticed outbreaks of skin lesions and curious pigmentation changes. The culprit, it turned out, was arsenic – naturally occurring underground in many deltaic regions and liberated from under the layers of sediment by the action of drilling into the deep aquifers.

By a savage irony, the expert advice was to drill to 46 metres, the depth at which the most arsenic-rich rock begins. So, as infant mortality rates tumbled, millions of people were slowly being poisoned by some of the highest arsenic levels ever recorded in drinking water.

International donors had funded many of the tube wells, but as their popularity grew, people began to dig their own. No one really knows how many tube wells have been built for domestic water supply in the country, but it could be over 20 million.

Why rivers of blood flowed through the Bangladeshi capital Dhaka

The contamination is concentrated in the southern part of the country. Other delta areas in South and Southeast Asia and further afield also experience this problem but Bangladesh’s uniquely large coastal exposure makes it by far the worst affected country in the world. Chronic arsenic poisoning has multiple, cumulative effects. Arsenic is a carcinogen, particularly toxic to the skin, liver, kidney, lungs and cardiovascular system. It also gets into the food chain, contaminating rice and other crops that grow in standing water.

Where does responsibility lie? What agents should be held to account? How far are these failures of politicians and governments, of international agencies, of legal processes? And do the roots lie deeper, in models of development driven by Western consultants?

There are no easy answers. A recent Human Rights Watch report on the arsenic situation finds that little has changed since 2003.

Responses from the government and international community have been haphazard at best. Programmes for testing water have stalled, funds are spent inappropriately, international agencies have moved on to more fashionable concerns. An attempt by a group of Bangladeshis to sue the British Geological Survey in British courts for failing to test for arsenic in the tube well construction programme failed. Denial and avoidance of responsibility carry the day.

Not the least tragic part is that Bangladesh so often finds itself defined by its contaminations. Its remarkable progress in reducing poverty and improving health, education and women’s rights deserves to be celebrated. Both politicians and international agencies need to face up to their responsibilities. Meanwhile, if you are visiting Bangladesh, stick with the bottled water.

Hilary Standing is Emeritus Fellow at the Institute of Development Studies and author of The Inheritance Powder, a novel based on Bangladesh’s arsenic crisis