Bangladesh has received a request from Sri Lanka on jute cultivation in its northwestern province Puttalam where Colombo assured of giving long-term lease of lands. 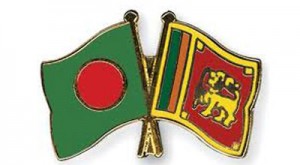 Both the leaders mentioned similar collaboration in the fisheries sector in the north of Sri Lanka, saying the Bangladesh private sector can restore a huge number of dilapidated waterbodies there for fish culture.

The Prime Minister extended her sincere thanks to the Sri Lankan President for excellent arrangement of the CHOGM and inviting her to the meeting.

Azad said both the leaders discussed various issues related to bilateral interests and ways of strengthening cooperation on several areas such as health, culture and education.

She said Bangladesh has always been consistent in supporting Sri Lanka’s fight against terrorism and insurgency. “Bangladesh views end of armed conflict as a welcome development for entire region,” she said.

Extending congratulations on holding provincial council election in the Northern Province after 25 years, the Prime Minister opined that it could be the beginning of Tamils’ participation in the country’s political process.

She expressed her firm conviction that greater efforts towards political settlement and reconciliation would lay the foundation of trust and confidence- building among communities and minority groups and enquired about Sri Lankan plans towards reconciliation initiatives.

President Rajapaksa thanked Sheikh Hasina for attending the CHOGM-2013 despite her extreme preoccupation at home due to the next general elections.

Later, the Prime Minister in a meeting with her New Zealand counterpart John Key at Bandaranaike Memorial International Conference Hall expressed the hoped that the Commonwealth would advocate and promote the interests of developing countries.

She also hoped that the CHOGM-2013 could be an important input to the ongoing international discourse on post-2015 Development Agenda.

Sheikh Hasina opined that the Commonwealth needs to remain engaged with Fiji in the coming years as it looks forward to election in September 2014.

The Bangladesh Prime Minister also called for continued engagement of the good offices of the Commonwealth secretary general with the Maldives for consolidation of democratic institutions in this country.