Bangladesh, the eighth most populated country in the world, is seething with political factionalism and constitutional confusions. Let me first note, however, that, despite ceaseless political turmoil, Bangladesh has secured significant economic growth since its independence in 1971 from Pakistan. The people of Bangladesh are entrepreneurial by temperament. They thrive as merchants, traders, and retailers. Bangladeshi immigrants control the Indian food business in the United Kingdom. Be not surprised to find a Bangladeshi owner behind almost every “Indian restaurant” in London. With copious initiative, Bangladeshis are taking over the Indian food and other retail businesses in New York City. In Kansas, a Bangladeshi immigrant has opened the first Malaysian fast food restaurant with exclusive rights to expand the franchise throughout the United States. Muhammad Yunus , who won the Nobel Peace Prize in 2006 for pioneering microloans to alleviate poverty, is the luminary of a culture that strives hard to wade through immense difficulty with patience and cunning. Goldman Sachs predicts that Bangladesh carries the potential of becoming one of the top economies in the 21st century. This economic potential will remain untapped unless Bangladesh overcomes toxic factionalism and constitutional confusions.

Unfortunately, Bangladesh continues to generate toxic factionalism. The nation is divided into numerous large and small political factions untutored in the science of politics. Emotions run high and irrationality rules decisions. Some factions are prepared to kill each other. Bangladesh typifies a nation where the ruling party, in order to remain in power, spends most state resources in suppressing opposition parties. Old politicians continue to nurse old wounds. Some are unforgiving. 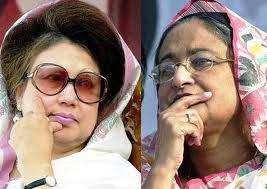 The feud between Prime Minister Sheikh Hasina and Former Prime Minister Khaleda Zia is a battle between secularism and Islam. The execution of Abdul Quader Molla for war crimes, even if defensible under the law, has widened the gulf between secular and Islamic political forces. The Bangladesh Supreme Court has turned into a highly secular institution. It found an excellent opportunity to demonstrate its commitment to secularism by converting Molla’s life imprisonment into a death sentence. The execution of a prime Muslim leader has strengthened the resolve of local militants to fight what they perceive to be the Hindu-dominated secularism. This development cannot benefit Muslims or Hindus.

Part of political turmoil stems from Bangladesh’s constitutional confusions. A prototypical national constitution serves at least two important goals. First, it articulates the nation’s supreme values. Second, it lays down a political procedure by which state power can be peacefully transferred from one government to the next. Unfortunately, the Bangladesh constitution, after the 15th amendment made in 2011, has become a hotchpotch of contradictions and confusions.

Now, the Bangladesh constitution espouses incompatible supreme values, Islam and secularism. The Constitution opens with an Arabic prayer, BISMILLAH-AR-RAHMAN-AR-RAHIM, found at the beginning of every chapter (except one) of the Qur’an. The prayer is translated in English: “In the name of Allah, the Beneficent, the Merciful.” The 15th amendment inserts an additional translation of the same Arabic prayer: “In the name of the Creator, the Merciful.” In replacing the word Allah with creator, the 15th amendment appeases non-Muslims, particularly Hindus (nearly 10 percent of the population). Article 2A of the constitution declares Islam to be the state religion. However, the 15th amendment expands Article 2A to “ensure equal status” to Hinduism and other religions. If the state is obligated to ensure equal status to other religions, it is unclear why the 15th amendment retained Islam as the state religion.

While the word Islam appears only once in the constitution, the word secularism appears four times in various constitutional provisions. The preamble to the constitution declares secularism, not Islam, as the high ideal. The 15th amendment modifies Articles 8 and 12 to reinforce secularism. The amended Article 8 declares secularism, not Islam, to be the fundamental principle of state policy. The amended Article 12 prohibits “the abuse of religion for political purposes.” In August 2013, the Bangladesh Supreme Court banned the country’s largest Islamic party, Jammat-e-Islami, contending that the party’s charter conflicts with secular provisions of the constitution. As noted above, the Supreme Court ordered that the leader of Jammat-e-Islami be executed for war crimes. Bangladesh is heading toward political chaos much like what occurred in Algeria and Tunisia, where religious parties were also banned bringing years of political instability and Islamic militancy.

The 15th amendment also deleted the constitutional provisions providing for a caretaker government during general elections. The opposition parties are refusing to participate in the 2014 general elections under the incumbent government. If parties are unable to find a solution to political stalemate, the opposition parties may resort to civil disobedience and deadly protests. The incumbent government may use political unrest as a pretext to postpone elections further deepening political chaos. If protests turn bloody and become unmanageable, a military takeover cannot be ruled out. On the brighter side, an intervening military government, with or without the consent of political parties, might serve as the inevitable caretaker government to hold the 2014 general elections.