The export of bicycle has increased by 7.12 per cent—some 4.31 per cent less than the target—during the first three quarters of the current fiscal year (FY), 2013-14.

The market players said the export of bicycle did not grow as much as expected due to annulment of incentives on its export, an increase in its demand in the local market and financial meltdown in the European Union (EU) countries.

Despite addition of two big players to the market — PRAN-RFL and Sri Lankan Firefox Bicycle — the export of the item did not increase substantially, reports the Financial Express. 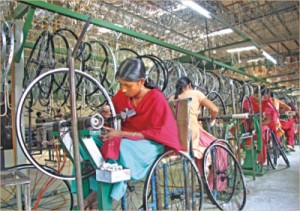 The target for bicycle export was set at $ 74.37 million, but the country earned $ 71.27 million in the first three quarters of the ongoing fiscal.

“The annulment of incentives, sale increase in local market and recession in the EU have affected the export,” said AHM Ferdous, General Manager of Alita (BD) Ltd, a leading bicycle exporter.

The government withdrew 15 per cent cash incentives on bicycle export in the FY 2012-13 along with some other products such as poultry, finished leather and crust leather.

Some 80 per cent of the country’s bicycles are exported to the EU market including Switzerland, Belgium, Germany, Denmark, Spain, Finland, France, the United Kingdom, Ireland, Italy, the Netherlands, Russia and Sweden. The rest 20 per cent go to India, the United States, the United Arab Emirates, Australia, Azerbaijan, Brazil, Canada and China.

According to the local manufacturers, the domestic demand of bicycle has risen by 70 per cent.

Abdul Haque, proprietor of Haque Cycle of Nazira Bazar, told the FE that their sale in the local market has grown 50 per cent in last one year.

He had to make his factory four times bigger in one year.

AHM Ferdous said the export of Alita (BD)’s bicycle has grown by 5-7 per cent in nine months although they expected that the export would reach at least 20 per cent.

Terming China the biggest competitor, he said, “We have possibilities to be the number one in exporting bicycle if there is proper and sufficient government patronisation.”

Bicycle is a big industry across the world. The US and the EU each imports three million bicycles per year. If the average cost of a bicycle is calculated at $ 100, the market is worth $ 6.0 billion. Despite the immense potential, Bangladesh’s possible share in the global market is now estimated at only around $ 100 million.

Currently, Bangladesh has four bicycle producers, two in export processing zones. Their largest chunk of output is exported to the European countries.

It was in that year that Bangladesh’s export of bicycles to Europe, measured in terms of ranking, rose to the fifth position from the tenth in the preceding year.

Bangladesh, as a least developed country (LDC), gets lower duty benefit from its exports to Europe. Following the tariff facility, Firefox is now manufacturing bicycles in Bangladesh for global market.

Currently, some of the world’s leading companies, including Raleigh, PCM and Motor and Sports of the UK, Aldi of the Netherlands, Bacht-enkirch Interbike of Germany, and M&F De Schee-maeker and Formula Cycling of Belgium are importing bicycles from Bangladesh.