Illegal mass-theft of cattle is a huge problem on the border between India and Bangladesh. Along the largely porous boundary between Bangladesh and the Indian state of West Bengal, cattle-raids and cattle-smuggling, often conducted by criminal gangs, raise hundreds of millions of dollars annually in illicit profits. The activity is so lucrative and dangerous that it often costs the lives of the perpetrators and innocent bystanders. 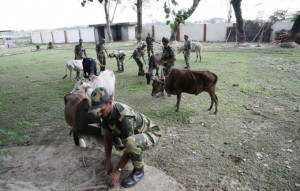 According to a report from Agence France-Presse (AFP), four men suspected of cattle-rustling were burned to death by a rival criminal gang in a village called Balaram Jote in West Bengal near the Bangladesh border, about 385 miles north of the city of Kolkata. Jag Mohan, the police commissioner of Siliguri, a city in West Bengal near the site of the killings, said two of the bodies were found inside a burned-out van that also contained the carcass of one of the stolen cows, while the other two bodies were in the vicinity. “There were injury marks on the heads and other parts of the bodies. We suspect that the four men were beaten up before being set on fire,” Mohan told AFP. “Two of them were burnt beyond recognition while the other two bodies were partially charred. Preliminary investigation has revealed that the incident was a fallout between two groups of [rival] cattle smugglers.” Mohan added that the bodies were transported to a state hospital for an autopsy and that no arrests have been made over the case. “Once the identities of the deceased are revealed, we would be able to obtain more details about the incident and find out about the attackers,” Mohan added.

The Calcutta [Kolkata] Telegraph newspaper reported that another police officer believes all the deceased were local residents – an area where cattle-raids are very common, often leading to deaths. In early January, the Daily Star newspaper of Bangladesh reported that a Bangladeshi cattle trader was beaten to death on the Indian side of the border, allegedly by people in the village of Falakata after he was caught “red-handed” stealing cattle. Indian border officials described the dead man as a “thief” while their counterparts in Bangladesh said he was a “trader” who was likely victimized by rival cattle smugglers over a feud.

India and Bangladesh share a poorly patrolled 2,400-mile border through which cattle illegally moves into Bangladesh from various parts of northern and northeastern India. Last September, Mridulananda Sharma, the superintendent of police of Dhubri, a town in the Indian state of Assam, just north of the Bangladesh border, suggested that cattle smuggling could be slowed down by tougher veterinary laws and migration rules. “The movement of local cattle cannot be stopped within the state and the district,” he said. “But there are veterinary rules regarding transportation of cattle and we are going to enforce them to stop cattle from being sent to Dhubri from other [Indian] states, which are then sent to Bangladesh.” Sharma also said police might hand over the seized cattle to a nongovernmental organization, “which will look after the cattle till they are auctioned off.”

However, the Telegraph noted that even when soldiers from India’s Border Security Force (BSF) seize stolen cattle, they are often attacked or even killed by mobs of people led by the smugglers themselves. Lawmakers fear that the depletion of local cattle would also hurt the farming economy on the Indian side of the border if police do not crack down on smuggling. Putul Chandra Roy Pradhani, the organizing secretary of the All Assam Students Union (AASU), which is better known for campaigning against illegal immigrants from Bangladesh, warned that strict legislation must be passed against cattle raiders as well. “[Cattle] smugglers are taking advantage of flexible laws,” he told the Telegraph. “In 2009 and 2010, [the local government] enforced rules and regulations that almost stopped the [cattle] smuggling. But those rules and regulations are not being strictly imposed now.”

Indeed, Indian officials have reportedly beefed up their monitoring of the borders to control both the movement of cattle out of India to Bangladesh and people into India from Bangladesh. Periodically, the Indian media reports on the seizures of illegal cattle cargoes, with little impact on the level of trafficking.

However, the problem of cattle smuggling is simply too large and too profitable—especially for poor isolated rural communities on either side of the border – for under-resourced police and border officers to stamp out. Himal Magazine reported that well-fed, healthy, mature Indian cattle can attract prices of at least 100,000 taka ($1,290) each – a princely sum in poverty-stricken Bangladesh and rural West Bengal. Cattle smuggled into Islamic-dominated Bangladesh are typically sold at fairs, to slaughterhouses and used for Muslim observances and ritual sacrifices.

Himal suggested that border patrol officers in both India and Bangladesh profit from the illegal smuggling by taking bribes to guarantee safe passage for the cattle in order to supplement their otherwise meager salaries. Customs officials and politicians in India also feed at this gravy train. Media reports have implied that some of the people who are wounded or killed along this lawless border were targeted for assassination by border guards themselves if they felt their bribe payments were insufficient.

Underlying this subject of cattle smuggling, of course, is the reverence for cows in Hindu-dominated India. The slaughter of cattle is illegal in most Indian provinces and regarded with horror by most devout Hindus. Nonetheless, India boasts a large and growing beef export market (although that comes principally from buffaloes, not cows). Still, this is something Bangladesh highlights when insisting they should be able to legally purchase Indian cattle.

Himal estimated that up to 25,000 Indian cows illegally enter Bangladesh from West Bengal every single day, suggesting the enormous scale of the trafficking. The Christian Science Monitor estimated that the illegal cow trade between the two nations approaches $1 billion. Bimal Pramanik, an independent researcher in Kolkata, told the Monitor that Bangladesh has an insatiable demand for beef. “Bangladeshi slaughterhouses cannot source even 1 million cows from within the country. If Indian cows do not reach the Bangladeshi slaughterhouses, there will be a big crisis there,” he said, adding that he estimates three-fourths of all cows slaughtered in Bangladesh originated in India. “In this thriving trade, [herds of] cows worth 50 billion rupees are sent across to Bangladesh every year. It’s the sheer economics of the trade that drives the smuggling,” Pramanik added.

Bangladeshi officials and human rights activists propose that smuggling and the violence that surrounds the dangerous trade could be eliminated if New Delhi simply legalized and normalized [cow] beef exports to Bangladesh. “We are really keen to import cows from India, and want all illegal activities involving [the] cow trade across the border to end,” said Bangladeshi commerce minister Golam Mohammad Quader. Even Utthan Kumar Bansal, a former BSF chief, agreed with Quader. “The menace of smuggling might be best controlled if the trade across the border is made legal. The legalization of export of cows could also help curb tension on the volatile border,” Bansal said.

The Australian Broadcasting Corp. (ABC) reported on a 19-year-old Hindu Indian boy named Utpal Mondan near the Bangladesh border who switched from farm labor to cow-smuggling in order to earn enough money to feed his family. “I saw some of my friends in this border area making money from this other kind of business,” Mondan said. “That’s why I started to do this illegal work [cow smuggling].” ABC noted that Mondan transports up to 40 cows across the border every month – smuggling just two cows nets him between 20 and 40 times the amount of money he could make as a farmhand for a whole day. “I know in the Hindu religion the cow is my God,” he lamented. “If I had money, I would never hand the cows over to other people.”

But smuggling is risky, involving paying bribes to border guards, who often cannot be trusted. “The Border Security Force is very aggressive,” Mondan said. “Sometimes they use firearms and sometimes boys are killed. Many incidents like this have happened in my village area.” According to human rights groups, the BSF has killed at least 1,000 people crossing the border over the past decade (not only cattle-smugglers). “They are only torturing and killing the people who are not paying the bribes,” Kirity Roy, the secretary of Masum, a Kolkata-based civil rights advocacy group, told ABC. Roy added that BSF have ignored directives from the Indian Government to only use rubber bullets when firing on border-crossers. “Even a few days back there was a firing and one man was killed,” he noted.

The Hindu newspaper noted that the riverine nature of much of the Indian-Bangladesh border actually benefits the smugglers. “How do you put up a fence on the river?,” a border official said. “You cannot. So the smugglers merely float the cattle in the water sometimes with a courier who swims across with them. Their counterparts on the other side will merely pull the animals out of the water.” As for fencing that now parallels a great portion of the border, smugglers have simply dreamed up methods to swing the animals over the barrier (with cooperation from villagers on both sides). The Hindu explained: “A few logs are tied up and made to rest on another forked on to act as a fulcrum. A hook is attached on one side of the lever which is latched onto a rope tied around the cow’s neck. The animal hangs by its neck and is then just swung across to the other side of the fence. The system is certainly cruel, but effective. It takes about 40 seconds to get an animal across to the other side and an hour’s time is enough to smuggle an entire consignment.”

Separately, the very idea of cattle smuggling and slaughter outraged many in India—Hindu nationalist groups in India will never allow the exportation of cows for slaughter (some are even opposed to the export of buffalo meat). This means that cow exports will likely remain illegal as long as right-wing nationalist groups and religious leaders hold sway over the large swath of the public, “The cow is our mother. We shall begin country-wide agitation if India decides to export cows to a country where they are likely to be slaughtered for … meat,” said Radhakanta Saha of the World Hindu Organization. “If the government were to legalize the cow smuggling trade then it would happen in a huge way, so we will never accept it,” said Santosh Kumar Sarkar, the vice president of the West Bengal branch of Hindu nationalist group Rashtriya Swayamsevak Sangh (RSS) to ABC.