Of all the countries in the world, Bangladesh is one of the most vulnerable to the effects of climate change. The regular and severe natural hazards that already batter the country – tropical cyclones, river erosion, flood, landslides and drought – are all set to increase in intensity and frequency as a result of climate change. Rising sea levels will increasingly inundate Bangladesh’s coast, and dramatic coastal and river erosion will destroy land and homes. These and the many other adverse effects of climate change will have profound repercussions for the economy and development of the country. 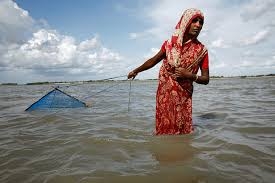 Bangladesh as a result of losing their homes, lands, property and livelihoods to the effects of climate change. While it is impossible to predict with complete accuracy how many people will be displaced by climate change, the best current estimates state that rising sea levels alone will displace 18 million Bangladeshis within the next 40 years. The vast majority of these people will be displaced domestically – not across international borders – presenting the government with enormous challenges, particularly when it comes to finding places to live and work for those who have been displaced.

Probal Rashid is a documentary photographer and photojournalist working in Bangladesh. He is represented by Zuma Press.

The entire population of this planet is facing one common issue right at the moment. Climate Change never seems to die away however much many other issues surface. The Diplomat reports how two neighbouring countries face this problem with hardly any solution.